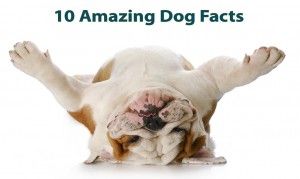 No matter how early you start training your puppy, nature and biology always have the last laugh. In this article we are introducing 9 interesting facts about dogs that are a bit out of the "ordinary".

1. Dogs are omnivorous. They need more than just meat to flourish.

One of the most controversial of these amazing dog facts challenges our assumptions about dogs’ diets. As much as dogs love a juicy piece of meat, dogs are actually just like us: they’re omnivores. The healthiest dogs will have a mixed diet that includes some vegetables and starch as well as pure protein. Dogs do have a carnivorous bent in that they generally prefer eating meat, but you should make sure that you feed your dog at least a small portion of food like boiled carrots or pumpkin to give them the best well-rounded diet.

2. People with more than one dog shouldn’t try to treat them all as equals.

If you own multiple dogs, it is likely that they have established a hierarchy within their pack that keeps everybody in line. As tempting as it is to favor or encourage a dog that is more submissive or shy than the others, this should actually be avoided. Dogs work best within these hierarchies, and trying to make a submissive dog more outgoing can make the submissive dog anxious and the more boisterous dogs jealous and resentful. This is one of the amazing dog facts that pet lovers everywhere should bookmark!

3. Dogs chew up your slippers because it smells like you.

The next time you find your dog snacking on your slippers, you might want to bear in mind this entry on amazing dog facts, as your dog is actually doing this to be close to you! Whilst chewing is usually a sign of bad behavior, dogs chewing on clothing items like slippers are often actually trying to release the smell of their owner, which they often find comforting.

We all know that dogs have an acute sense of smell, but many do not realize that a dog’s senses are so fine tuned that they can literally smell sickness and disease. A dog can smell the changes in organic compounds and hormones that humans give off when they are ill (or about to become ill). This is why some dogs can sense an epileptic attack before it happens or know if a diabetic is dangerous low on sugar.

5. The average one-year-old dog is physically as mature as a 15 year-old human...

What some do not know is that the aging of a dog is linked to their breed and size. Overall, large dogs generally do not live as long, but paradoxically, they can also mature later as well. However, in general, a one-year-old dog is on the brink of maturity similar to a 15 year-old human. Related article: The Truth Revealed About Your Dog's Real Age!

6. ...But the average dog has the same mental age as a two-year old human

People often refer to dogs as babies, and in reality that is a pretty accurate epithet. According to one study, the average dog can understand about 165 words and signals, and even do simple counting and calculations. That mentally puts them at about the mental age of a human two-year old.

If your dog wakes you up at the same time everyday and is waiting for you at the door when you get home, it’s not just that your dog is well-trained: dogs have incredible internal clocks and thrive in well-scheduled and routine environments. Dogs can quickly pick up on what time the milkman comes, what time you leave for work, and what time they are likely to be fed. This one of the amazing dog facts can work to your advantage as dogs, being creatures of habit, can get into a good feeding and sleeping schedule quicker than many pets. However, they don’t like to have their routines disturbed.

8. Dogs can see in color

It’s a well-tread myth that dogs are colorblind, but one of the amazing dogs facts is that dogs can actually see color—although still not as well as humans. Dogs have fewer color-detecting ‘cones’ in their eyes than humans, so their range of color is more limited: typically, dogs can see various shades of blue, green, brown and grey. Dogs lack the cone for interpreting red, so this is color they often struggle most with.

9. The most useful of our amazing dog facts: Dirty dogs keep babies healthy

If you have ever worried about having your dog and baby play together because of germs, then fear not: babies who play with dogs actually tend to be healthier than those who grow-up in non-dog households. Babies who play with dogs interact with more germs and dirt, and therefore have strong immune systems and therefore get sick less! Do you like these amazing dog facts? Feel free to leave a comment or share it on your social media accounts!
Share:
Tweet