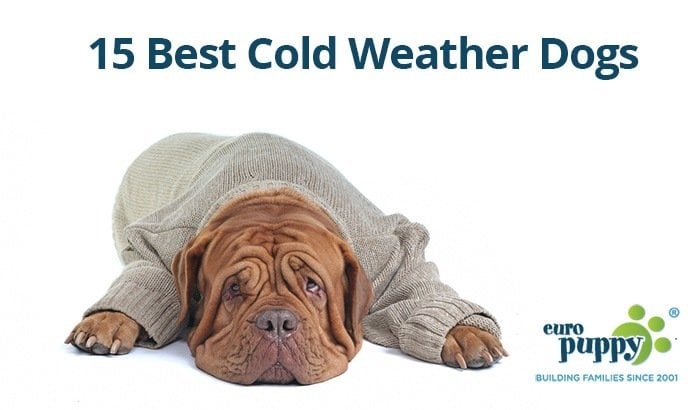 ​Don't think that just because your dog has fur that it can protect itself against the cold. Some canine breeds have fur that is better insulated for cold weather than others.

If you live in a cold climate region and enjoy outdoor excursions, then the following 15 cold weather dog breeds will fare just fine when the temperature drops to single digits.

The Akita originated in feudal Japan and was a popular pet among noble families. Bred as a cold weather hunting companion, it has a dense undercoat with a harsh outer coat.

They do shed twice a year, and regular grooming between shedding periods is required to keep the fur from over drying.

While Akitas are known to be stubborn, they can also be fiercely loyal with an inherent desire to protect the household. They are also very social, so constant attention on the owner’s end is required.

Like the husky, the Alaskan malamute was bred as a sled dog and has quick stamina even when hauling heavy loads. They are the oldest and largest species among the Arctic dog breeds.

They do tend to shed during the warmer months, and this is also the time when you have to groom them.

Brush their fur twice a week and make sure the brush reaches the scalp to loosen fur tangled into knots.

Despite its name, the American Eskimo dog originated in Germany and has no connection with Eskimos. While most cold weather dogs have thick fur to protect against the cold, the American Eskimo’s fur goes beyond basic weather protection; the coat also helps to wick away moisture and prevents its body from getting soaked.

This breed does suffer from separation anxiety if the owner is seldom around, so never leave the dog by itself for prolonged periods and do make a point to keep plenty of toys around to keep it occupied.

The Bernese Mountain dog was originally bred as a species of cold weather dogs capable of hauling heavy gear through the snowy mountains of Switzerland.

Despite their size, they are also one of the shyest winter dog breeds and may shy away from strangers if not socialized.

Just one glance at the chow chow and you will know that it is prepared for the cold. This breed welcomes chilly climates with its wooly coat.

However, it is also because of their thick fur that they are prone to heat prostration. Chow chows should not be exposed to hot weather for prolonged periods.

Keep it indoors during the summer and never leave it inside a car.

German Shepherds are commonly used by law enforcement due to their agility and endurance. They also have the ability to learn quickly and are good at obeying commands with a little reinforcement training.

Since these cold climate dogs are sociable and love being with their human pack, don’t keep them alone in the yard for long periods.

The Greater Swiss Mountain dog was originally known as the “poor man’s horse” and was treated like one due to its bulk, strength and endurance. They were often used as draft dogs by Swiss farmers during WWII.

Despite having a short coat, its fur is capable of warding off the cold. This also makes grooming a cinch; brush about once a week to remove dead fur and to distribute the skin oil to keep the coat gleaming.

The Great Pyrenees certainly looks like it belongs among the cold weather dog breeds with its thick white coat. They were once used to herd sheep and other livestock on the steep mountain slopes of France.

It is also for this reason that they have great agility and make a great companion if you enjoy long outdoor walks at high elevation during winter.

This is a breed that does shed year-round, so regular brushing does need to become a weekly ritual.

Originally from Tibet, the breed later made its way to Hungary where it became a popular species among wealthy households.

The Kuvasz is a true elite in the class of winter dogs with its double coat. With its high energy output, it is a breed best for owners with a large open yard.

Give it regular exercise but nothing too strenuous or else it may develop joint problems later down the road.

This is an excellent dog if you want a low energy canine that doesn’t run and jump all over the place. As its name suggests, it was bred in the icy terrain of Newfoundland and has the thick fur to protect it against the frigid temperatures of the area.

Today, the Newfoundland dog is used by Canadian rescue teams and is renowned for their superb swimming skills.

While they are not the most active dogs, they do need regular exercise. 20 to 30 minutes of moderate activity, such as a run at a light pace should work.

Saint Bernards became popular ever since the first Beethoven movie came out in 1992. At a weight of up to 200 pounds for an adult, Saint Bernards are among the largest cold weather dogs.

They are relatively docile and not particularly active, though they do have stellar endurance and have been used by rescue teams to treck hundreds of miles in snow in search of missing hikers.

The Samoyed was bred in Siberia and used for herding, hauling sledges and hunting. Its fur is so durable that it is sometimes used in place of wool for knitting.

This is a high energy dog breed, so a commitment to give it daily exercise consisting of running, fetching, and yard play is a must.

The Siberian Husky is a breed that needs little introduction. Huskies became famous after a pack of 150 traversed the snowy terrain to deliver life-saving medicine to sick children in a small Alaskan town in 1925.

Being that they are a byproduct of the Siberian wilderness, their fur is made for withstanding extreme temperatures.

Due to their high energy, they do require an open yard and daily walks or trips to the park.

The Tibetan mastiff was previously exclusive to the Himalayas. Their thick undercoat protects them in the winter and lightens up to keep them cool in the summer.

As a flock guardian dog, they are overprotective and can get aggressive when confronting predators.

However, domesticated varieties that have been conditioned and socialized will do quite well in a home with sufficient yard space.

With its protective double coat and round flat feet for traction in the snow, the Tibetan terrier is another breed well acclimated to sub-zero temperatures.

Of all the winter dogs, this is the species that is extremely well adept at traversing snowy mountains for long distances.

Even if you’re not the outdoor type, the Tibetan Terrier’s laid back personality also makes them a great indoor companion pet that doesn’t demand too much exercise.

As an owner it is very important to keep in mind that just because winter dogs are acclimated to cold climate does not mean they can be exposed to frigid weather indefinitely.

If kept outside long enough, they can become susceptible to hypothermia and frostbite.

Also keep in mind that if you plan to keep your dog outdoors for longer periods during the cold, be sure to give them more food because its body will burn more calories to stay warm. Regardless of the breed, never test its limit on its ability to endure the cold.