July 12, 2010 by Sandor Fagyal
The right body language and dog training go hand in hand. You must have noticed that sometimes your dog flinches away when you hug him. Sometimes, no matter how wide your welcoming arms are, or how coaxing your voice is, your dog will not come when called. The problem may not be due to bad breeding, lack of consistency, or lack of training time. You may simply be sending your dog the wrong body language messages. Some examples of these and how to overcome them: • Our body language vastly differs from the body language of canines. As humans, we try to catch someone’s attention by leaning forward or towards a person. Translated into canine body language this means dominance. We may put our hand on each other’s shoulders. This is a simple sign of affection for us, but for a dog this equates with expressions of dominance again. It is simply interpreted as pushiness. When a dog has the habit of urinating submissively, it is advisable not to lean forward and pat the dog on the head when greeting it. A dog or puppy will feel less intimidated and won’t urinate submissively if he doesn’t see or feel dominant body language. For some dogs, who have an inherent dominant or submissive character, being stroked on the head is not a welcome gesture. It is advisable to stroke them on their chests. • A common problem comes from the “come” command. An effective remedy for a dog that will not come when called is to alter your body language. Don’t lean forward, but rather crouch down. This is a calming signal; a gesture that is inviting. Dogs will greet each other in a similar way; by turning their backs to each other and sniffing the ground before getting playful. If that doesn’t work, then start running away from your dog, with your back turned. This will invite him to follow you. Clap your hands and say “come.” The staccato rhythm of clapping hands or clucking, what we do with horses to encourage them to speed up encourages a dog to move as well, and this body language encourages it to move in your direction. 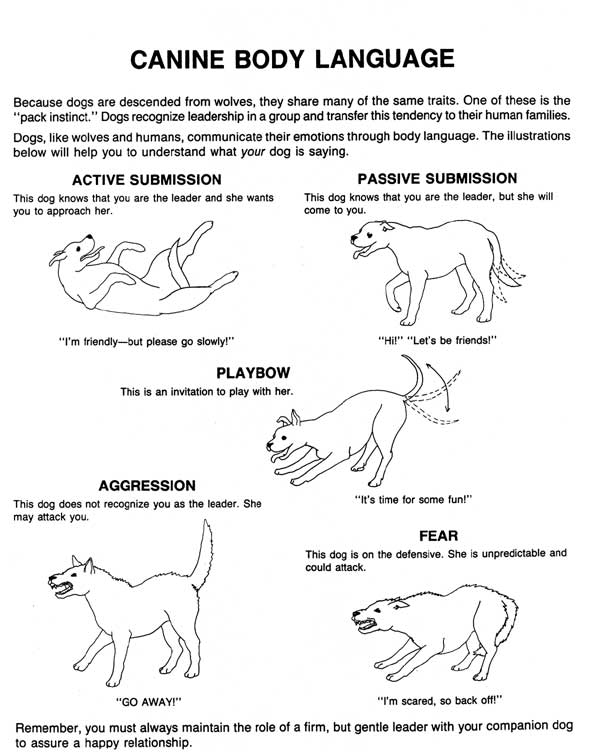 • Watch your body language as you train, and be aware of what your dog understands. Does he comprehend the spoken command or the body language you use? Some dogs become so used to getting a treat that they never really learn the verbal commands. Do you snap your fingers or point for the sit command? None of these gestures are wrong; it’s simply an example of your dog learning first from your body language. You can, however, “fade” a gesture by using the verbal command first, waiting, and only afterwards showing the gesture. Eventually you can do half the gesture, then eventually, if you work on it, your dog will learn the verbal command and won’t need to be prompted. • Primates also use their voices very differently than canines. A dog that is calm and controlled is usually silent. Dogs bark to defend territory or when excited. Puppies tend to bark and use their voices more than dogs do. On the other hand, we humans associate a loud voice with command. In a dog’s world, someone who yells is behaving like a puppy or sending out an alarm. So when you get frustrated that your dog isn’t listening to you, and you yell at him, you are essentially going to be associated with a puppy, not someone in command. So it is important in training to use a firm, low voice. You will be more respected and your dog will learn to listen to you much better. Adjusting your body language to that of the canine world will improve your training and your relationship with your dog. We carry with us the subconscious habits of communicating like the primates we are, so it takes a very conscious effort to change our inherent habits in training. But once you get the hang of it, it will come naturally to you to gesture towards your dog in a way that will make sense to him, and both of you will be happier for understanding each other. Ask the average person to tell you whether a dog is happy or not, and they will advise you to look at its tail -- if the dog is happy, the tail is wagging. Yes. But this is only partly true. Some tail wags have totally different meanings. This can be especailly important in understanding canine body language. - A rapid tail wag, where the tail swings from side-to-side in a not very large, but constant way, is actually a sign of excitement rather than pleasure. - A moderately fast, broad tail wag: the dog is trying to say either "I’m pleased" or "I like you." - A slight tail wag with the tail held at its normal height, for example, usually appears when greeting someone. It can be interpreted as "Hello there," but can mean "I see you looking at me. You like me, don’t you?" - A slow tail wag with the tail held lower than its usual height is a sign of insecurity. It often shows up when a dog is working on a problem -- trying to understand what is going on. During dog training, this can be interpreted as "I’m trying to understand you. I want to know what you mean, but I can’t quite figure it out (yet)." - Once the dog finally solves the problem, the speed and size of the tail wags will usually increase until it becomes the broad wag that we interpret as happiness!
Share:
Tweet