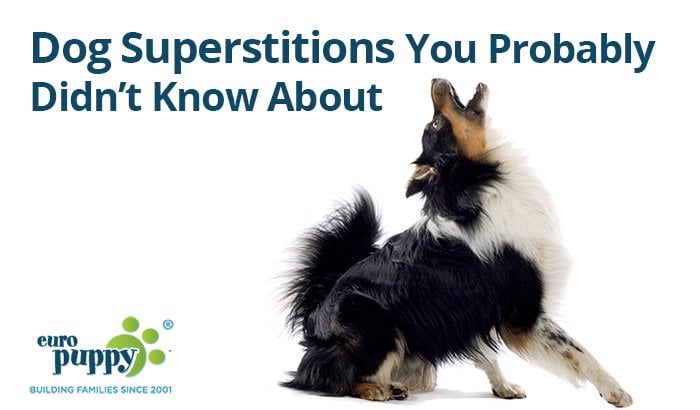 As man’s best friend, dogs have become the centre of many myths and superstitions over the course of history.

While some are based in fact, others are quite crazy and sound unbelievable to modern ears.

Table of Contents
1. Dogs can sense death 2. Greeks thought dogs could foresee evil 3. Dogs can sense the supernatural 4. Most dogs are physically or behaviourally incapable of killing livestock. 5. Dogs are lucky or unlucky, depending on who you ask

Here are 5 of the most interesting superstitions involving dogs.

When a dog howls in an otherwise silent night, it is said to be an omen of death, or at least of misfortune. A howling dog outside the house of a sick person was once thought to be an omen that they would die, especially if the dog was driven away and returned to howl again.

A dog that gives a single howl, or three howls, and then falls silent is said to be marking a death that has just occurred nearby.

Interestingly, however, the superstition that dogs can sense death is actually based partially on fact. Dogs have such an acute sense of smell that they can quite literally ‘smell’ disease in humans, and they are sensitive to the slightest changes in our pheromones and smells that humans cannot detect.

It is for this reason that epilepsy sufferers often have companion dogs, as dogs can sense certain kinds of epileptic fits before they happen. Dogs have been known to detect early-stage cancer in some patients.

Obviously, dogs can also sense that a death has happened before humans can in that they can smell the deterioration of a corpse before it is strong enough to perk a human’s sense of smell.

Dogs have acute senses of hearing and smell, but the Greeks went one step further in thinking that dogs could actually sniff out evildoing before it happened.

The reasoning behind this for Greeks was simple, humans could not see the mischief-making Goddess Hecate, Goddess of magic and witchcraft, but dogs could sense her presence. A dog taking unkindly to certain strangers was seen as a sign that the stranger was untrustworthy.

Our ideas about dogs sensing bad intentions have worked their way in our cultural consciousness. It is something we still see as a trope in films today:

Dogs bark at the bad guys before they commit an evil act!

3. Dogs can sense the supernatural

Dogs have always been credited with the power of sensing supernatural influences, and seeing ghosts, spirits, faeries or deities that are invisible to human eyes. In Wales, only dogs could see the death-bringing hounds of Annwn. In ancient Greece, as mention previously, dogs were aware when Hecate was at a crossroads, foretelling a death.

Dogs are aware of the presence of ghosts, and their barking, whimpering or howling is the first warning of supernatural occurrence.
﻿

How much of this is true largely depends on your own beliefs: many swear that dogs really can sense the supernatural, whereas others believe they are often simply barking at their own shadows.

4. Most dogs are physically or behaviourally incapable of killing livestock.

Perhaps because of our attachment to man’s best friend, there is a superstition that dogs cannot kill livestock.

While the veracity of this claim has never been proven, it is likely based in our own human failings: we don’t want to imagine that dogs can kill livestock without provocation.

For most domesticated dogs, this idea will largely run true: we have made most breeds of dogs so docile that they are unlikely to harm another animal without some kind of provocation. However, more volatile breeds of dogs will kill small livestock like chickens, and feral dogs may kill livestock (calling back to the ways of their wolf ancestors) as a means to survive.

5. Dogs are lucky or unlucky, depending on who you ask

We often light up when we see unexpectedly see dogs, and some would go as far as to say that seeing a dog in certain circumstances can bring you good fortune. In Scotland, a strange dog coming to the house means a new friendship; in England, to meet a spotted or black and white dog on your way to a business appointment is lucky.

Three white dogs seen together are considered lucky in some areas.

However, not all kinds of dog encounters are considered lucky, and some even think dogs are naturally unlucky creatures. A lot of this is based on our prejudices about certain breeds of types of dogs.

Black dogs are generally considered unlucky, especially if they cross a traveler's path or follow someone and refuse to be driven away. This is very analogous to a similar superstition following black cats, and is probably the source of the superstition surround dogs.

Even though many breeds of dog love the water, fishermen in certain parts of the world traditionally regard dogs as unlucky and will not take one out in a boat, or mention the word ‘dog’ whilst at sea.