July 12, 2010 by Sandor Fagyal
Euro Puppy has done a little research. Any brand, that has a dog as a mascot is appreciated by us. Curious as to the origins of the Hush Puppies shoes we did some research, and Boy, are the results amazing! Most of us know the Hush Puppy adverts...of a sad-faced, yet adorable Basset Hound with the longest of ears. All in aid of selling a few very comfortable shoes, called " Hush Puppies". But where does it originate from? Well, a Hush Puppy is actually an American food that consists of small cornmeal balls that are deep-fried. The ingredients include cornmeal, flour, eggs, salt, baking soda, milk, and water, and can include onions and peppers. How did a fried ball of cornmeal get that name and what connection does it have to a Basset Hound, or shoes for that matter?? Well, “hushpuppies” is often attributed to hunters or fisherman who would quickly fry corn meal and feed it to their dogs to “hush the puppies” during cook outs so that while the dogs were quiet, they could talk. So how did a Basset Hound and comfortable shoes get that name??? Well to be able to understand that, Pig-skin has to be mentioned. Say what? Yes. Pig-skin... 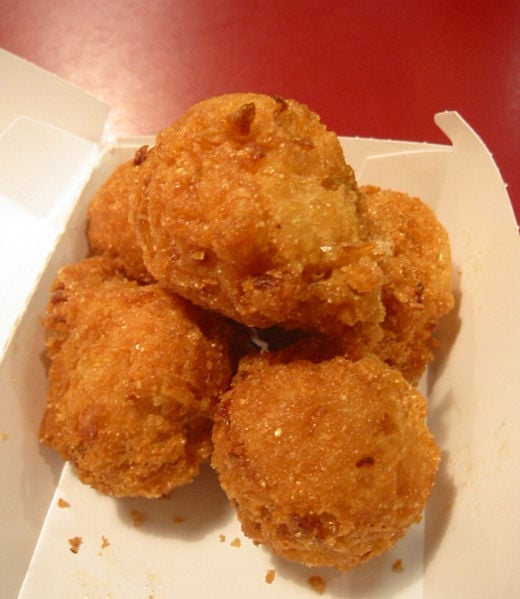 The Hush Puppies brand was founded in 1958 and the aim was to develop a practical method of pig-skin tanning for the US military. Pig-skin is believed to be one of the strongest of leathers and the Government wanted to use it for making gloves for soldiers. From the idea of gloves, shoes were born. The brand became instantly recognizable as a leisure casual wear of the late 1950s and 1960s American life. It experienced a resurgence in popularity again in the 1980s and 1990s. The Hush Puppies name and mascot were the creations of the brand's first sales-manager, James Gaylord Muir. Initially, the company's advertising agency recommended naming the product "Lasers". However, while on a selling trip to the southeast, Mr. Muir dined with one of his regional salesmen and the meal included the traditional Southern fried cornballs, or more precisely: hushpuppies. Mr. Muir saw a connection to his new product. The term "Barking dogs" in the 1950's was an idiom for sore feet! Putting two and two together Mr. Muir realized that his new shoes from pig-skin were so comfortable that they could "quiet barking dogs" - alleviate soreness in feet...or hush the puppies as it may be. And so Hush Puppies was born! Today, Hush Puppies are manufactured mostly in Hungary and as a brand, it has one of the highest brand recognition levels in the world, with many countries reporting over 90% recognition. Who would have thought...... 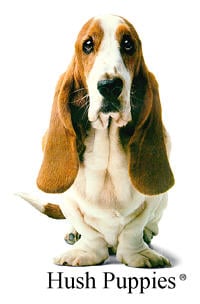