Dognapping on the rise 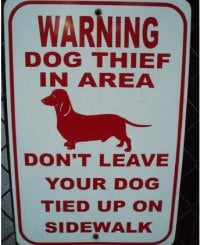 According to a recent article of USA Today, the number of dogs being stolen has risen dramatically in 2011. Stealing dogs with the intention of demanding a ransom from the owner is not a new phenomenon. In fact, the first ever dognapping case was recorded in 1934. The stolen Boston Terrier was returned to its owner after 5 long months so the story had a happy ending. Dogs become part of our families. They will be just like a small brother or sister to the kids. And when they are kidnapped and there is a chance that money can buy them back, we pay gladly – provided that we have the money demanded, that is. Over time, as conformation showing became more popular, show dogs became the targets of thieves. It's easy to see that if the owner of a regular dog is willing to pay thousands of dollars in ransom, the owner of a valuable show dog might pay tens of thousands of dollars to get his pooch back. Dognapping – not only for ransom but reselling, experiments and a number of other purposes – has become widespread in the United States by the 60’s. So much so that it had actually become one of the most talked about issues of the time. The public dismay and the floods of letters demanding something to be done put enormous pressure on the senate. As a result, the “Dognapping Law”, which became the Animal Welfare Act of 1966 was born. Almost fifty years later, the situation seems to be getting out of control once again. According to the AKC, reports of stolen dogs rose by 49% in the first 7 months of 2011. The numbers have been growing steadily since 2008, which is – to a large extent – due to the economic turmoil the world is going through. Fortunately, a Euro Puppy dog has never been stolen, but we thought a list of breeds that are more likely to become the victims of theft could be useful to our customers as well as any dog owner: If you have a dog of one of the above breeds, your dog is a more attractive target for a criminal than most other breeds because of its size, popularity or both. You need to pay extra attention when going for walks and meeting strangers. Never leave your dog tied to post in front of a store or alone in a car. Unless your dog is very obedient and always comes back when called, never let him off the leash in public. If the breed of your dog is not listed above, that doesn’t mean you should not be careful of course. Any dog that is left unattended will become an attractive target of a thief looking for its next victim.
Share:
Tweet