Euro Puppy Works With Only the Best European Havanese Breeders!

July 12, 2010 by Sandor Fagyal
The "Little Dog from Havana" was developed in Cuba, and was brought to the island country by Spanish sailors. The Havanese - as it became known- was considered a rare dog, and the Cuban Revolution didn’t do much to perpetuate their gene-pool. Many of the rich landowners escaped, leaving their dogs behind. By 1970, there were only 11 of these candy-floss dogs in the US, and thanks to the rigorous and well-meaning breeders within the US and Europe, their number and popularity has grown. 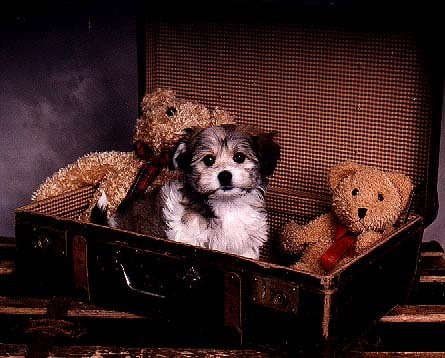 Euro Puppy has been working with top Havanese breeders from Europe since the onset. These are breeders who have extensive knowledge about the breed standards and take an active role in socializing the Havanese puppies; making sure that they are healthy and happy puppies. This is an imperative character trait of these little dogs, even as they mature into adulthood. Euro Puppy has a history of working with only the best Havanese breeders and a guarantee has always been given to them concerning the home that their Havanese puppies are shipped to. Since not only the breeders, but the safe shipping and the homes are of high standards as well. The Havanese breeders can thus rest assured that their beloved Havanese puppies are given the same degree of care and love as what they gave them before. The Havanese is a very people-oriented dog. It is at home with children and is rarely nervous around new people. The Havanese's love of children stems back to the days when it was often the playmate of the small children of the households to which it belonged. Unlike most toy dogs, who are too delicate and sometimes too aggressive to tolerate the clumsy play of children, they make cheerful companions to even younger children. Havanese puppies and dogs are clever and active and they will often solicit attention by performing tricks. They are very lovable, friendly and have a balanced temperament that many dogs of their size lack. Their small stature makes them “adult dogs with the soul of puppies”. The Havanese is also considered to be a non-allergenic or hypoallergenic dog as it does not shed or have the typical doggy smell. This is no small part of its growing popularity around the world, for allergic and non-allergic dog lovers alike! Another interesting fact about Havanese puppies is that they live for approximately 18-20 years! Our top European breeders at Euro Puppy have also vouched for this and this makes them one of- if not the- healthiest dog breeds alive! What a wonderful prospect of raising a child while raising a dog. Your child can grow up in the company of a good-spirited and healthy puppy that will grow into an equally good-spirited dog! At Euro Puppy, we have adorable Havanese Puppies for sale. All colors can be found at Euro Puppy. The unique and very rare chocolate-colored Havanese puppies are also for sale. This rare color scheme makes them even more precious. Chocolate Havanese puppies from the most dedicated European breeders will put a smile on your face for the next 18-20 years. Guaranteed! And you wondered up till now why the experts call chocolate the “Happiness Hormone”...
Share:
Tweet