July 12, 2010 by Sandor Fagyal
It's a great victory for natural justice. When football superstar Michael Vick pleaded guilty to running a dog fighting operation, 50 pit bulls were condemned to die. However, instead of going by the stereotype of pit bulls, judge Henry E. Hudson decided that each dog will be individually evaluated, to decide it's temperament. On evaluation, only one had to be put to sleep, as it was deemed irredeemably aggressive. A real ray of hope for those believe in a second chance! Hector and Johnny, two pit bulls rescued, muzzle each other in the picture. Read the full story here: Saving Michael Vick's dogs 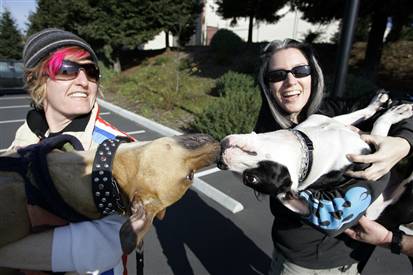