Odd Couples – The Strange Friends Our Dogs Can Make

July 12, 2010 by Sandor Fagyal
A Rottweiler and a wolf have formed the oddest new relationship in the animal world. As newspapers have been reporting a 150lb Rottweiler called Ulrok has befriended a tiny wolf cub called Beldaran in he Kisma Preserve in Maine, USA . He is a fully grown Rottweiler. She is a tiny wolf pup. They sleep together, frolic in the sun and even howl at the moon in unison. 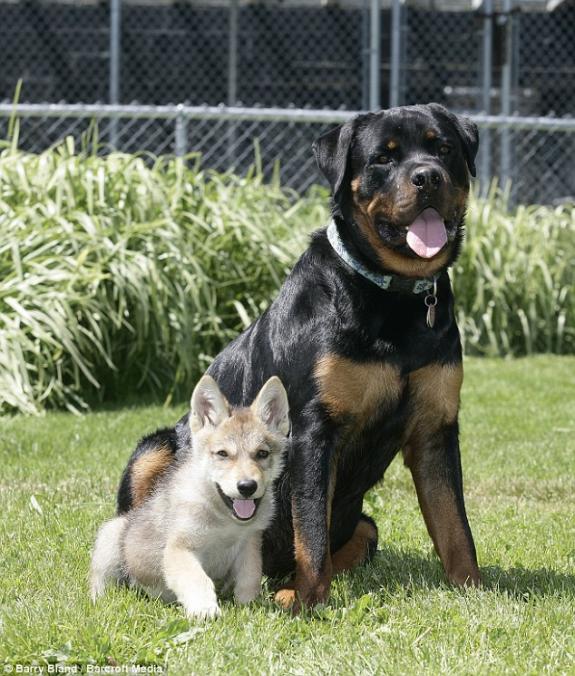 This is far from the strangest friendship we’ve come across, however. In China, for instance, a Chihuahua adopted an orphaned chick. The dog acted as the chick’s surrogate parent picking it up in its mouth and taking it safely home when it risked getting into trouble. In the US a dog and a giant black bear have been observed by scientists happily together in the captive bear’s cage. Dogs have also been known to let the offspring of other species suckle from them. Again in China, a kitten and a pair of tiger cubs have been observed feeding off the breast of dogs. Dogs can even behave well towards their supposed worst enemies - cats. A scientific study found that cats are more likely to be chased if they are running away from a dog. The sight of the fleeing cat triggers a dog’s deep-rooted instinct to carry out prey chasing. Cats avoid being hurt by a chasing dog by learning to freeze and to lie down, with their bodies and head flattened to the ground. Denied the thrill of the chase, the dog will often lose interest.
Share:
Tweet