July 12, 2010 by Sandor Fagyal
There cannot be too many airlines in the world which dabble in dog breeding. Well, the Russian Aeroflot Airlines has its very own dog breeding centre, and a new dog breed has been developed by them for the sole purpose of having a drug and bomb-sniffing hound at the Moscow Airport. So what is this new breed like? They are a unique breed - a cross between a Siberian Husky and a Turkmen Jackal. Before you lift your eyebrows in shock, it is worth mentioning that this rather unique combination took 27 years to perfect and the result is amazing! The Russian Aeroflot claims it has managed to produce the world's greatest sniffer dog, by combining the genes of a Husky with a Jackal. Their breeders claim that they are much more effective than the Labradors or German Shepherds that are more commonly used in the West. At first sight, they look much like a normal Husky, although they are a bit smaller and have a Jackal's thick black whiskers. The Husky and Turkmen Jackal were picked for the breeding project because of their extremely keen noses. The former has evolved to sniff out the faintest odors in Arctic conditions when the deep cold suppresses smells, while the jackal has a nose more sensitive than its cousin, the domestic dog. Siberian Huskies are known for their obedience, while pure Jackals make poor working dogs. They are too afraid of people and are hard to train and domesticate. They hail from the warmer climates of central Asia and suffer in the Russian winter. 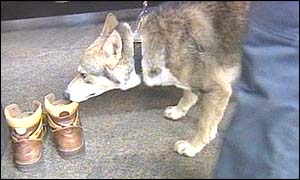 According to Aeroflot’s chief dog breeder, Klim Sulimov: “The best thing about these dogs is their sense of smell. They can sniff out certain explosives which ordinary machines can't trace. And they're much cheaper. My dogs combine the qualities of Arctic reindeer herding dogs, which can work in temperatures as low as -70C, and Jackals which enjoy the heat up to +40C. They're perfect for our country”. Aeroflot says breeding super sniffer dogs has become a necessity. The rise of terrorism made all airlines look more tightly at security issues. Aeroflot, however, believes the dogs will eventually pay their way and is even planning to market them worldwide. There is already a great interest from other airlines for this new breed. Each of the dogs is worth about $5,000. So far, 40 of the dogs have been bred. Thirty are working at Moscow's Sheremetyevo-2 international airport. A name for the new breed has yet to be chosen, although Huscal and Jacky have, apparently, been ruled out. It may be unusual for an airline to breed its own sniffer dogs, but with Russia fearing attacks from Chechen militants and al-Qaeda, anything which helps passengers feel safer in the air must be worth the expense.
Share:
Tweet