Say no to doggy-style!

July 12, 2010 by Sandor Fagyal
Some things (and people) never cease to amaze Euro Puppy. A collection to walk down the runway out of P-Diddy’s collection was fur-hooded coats with an element of a tailwag to it. Fur from a breed of dog called “raccoon dog” was used to make the garments. These dogs look more like raccoons, but belong in the canid family together with dogs, foxes and wolves. Although the resemblance to a raccoon is startling, it is not related to a raccoon at all. Its family name is "Canidae," Latin for "dog,". This animal is definitely a dog. They are barbarically slaughtered in China. Or should I say anally electrocuted? Hundreds or thousands of these puppies and dogs were killed to create the clothing line of the rap-star. Following an investigation by the Humane Society revealed that they contained fur from raccoon dogs, despite the fact that they were being advertised as faux fur. A spokesman for Macy's talked about its long-standing policy against the selling of any dog or cat fur. Macy’s banned the clothing line and it seems P Diddy is not going to take this lying down. P-Diddy also expressed his outrage and concern, saying "I was completely unaware of the nature of this material, but as soon as we were alerted, the garments were pulled off the Macy's floor and the Web site." He stopped the production of his fur-coats. Strangely enough, both Macy's and P-Diddy freak out when they discover there is a fly in the soup and dogs in the clothing line. However, they're perfectly content to produce and sell fur garments made from other animals? I would love to know what the rationale behind this really is…If you wouldn't wear your dog, why would you wear any other fur? < sigh > 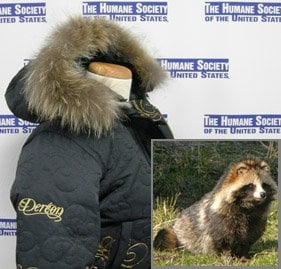