Strict Regulations of Exporting Dogs to Island Countries…Euro Puppy Has Done It Again!

July 12, 2010 by Sandor Fagyal
Euro Puppy, has managed to get through the yards of red-tape that accompany the exportation and shipping of dogs and puppies to Island Countries! Have you ever wondered why Robinson Crusoe didn’t have a canine friend with him on his island, instead of having “Friday”? Well, he actually did have a dog….that lived 16 years with him, and yet there is hardly any mention of him in the story! Nevertheless, these days Daniel Defoe would surely have to rewrite his story, since not only could Crusoe have gotten home in one piece, but he could have even imported a dog if he wished to stay on his island paradise! Although it is rather difficult to export dogs to island countries like Japan, Cyprus, New Zealand, U.K, Euro Puppy has managed it rather successfully! 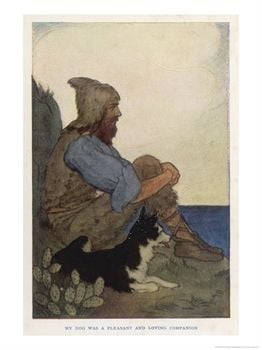 " My dog was a pleasant and loving companion " - Robinson Crusoe
Keep reading...
In 2007, Euro Puppy was contacted by many dog-lovers living on Island Countries. It was extremely difficult to ship a much-awaited puppy to New Zealand due to strict regulations about quarantine. However, the dog is now with one of the best kennels in New Zealand to improve the kennel and the breed standard even further. Euro Puppy also managed to ship a beloved Yorkshire Terrier to Cyprus recently. He now goes by the name of Ireland and is having the time of his life, with his new parents! Two gorgeous Irish Wolfhounds were shipped to Japan. It was immensely difficult to have the paperwork approved by the Japanese government, but Euro Puppy stuck it out until the two mammoth Wolfhounds were allowed to be imported into Japan. The Scandinavian islands also proved a handful for the devoted team of dog lovers, due to highly controlled and strict quarantine regulations. The satisfied customer’s dream for many years was to get quality in the breed she wanted, and she finally found it through Euro Puppy. Now she is a proud owner of a champion-line, top-quality, pure-bred Canary Dog from a top European breeder. Although Island Countries are extra careful about importing dogs and puppies, due to their fear of Rabies and other transmittable diseases, all the puppies at Euro Puppy are examined by a staff veterinarian prior to their shipping. A lifetime guarantee is given with each puppy purchased and strict quality assurance programs validate all the breeders so that the high standards are upheld at all times. The shipping is done under strict and hygienic conditions. Had Robinson Crusoe lived today, he may never have needed to mourn his beloved canine or leave his island paradise…
Share:
Tweet