The Origin and Evolution of Dogs

July 12, 2010 by Sandor Fagyal
Dogs (and wolves and foxes) are descended from a small, weasel-like mammal called Miacis which was a tree-dwelling creature and existed about 40 million years ago. Dogs, as we know them today, first appeared in Eurasia about 13,000 years ago, and were probably a direct descendant of a small, grey wolf (not from the type of jackal or jackal/wolf as previously thought). Dogs were first domesticated by cavemen in the Paleolithic age and gradually developed (or were bred) into the breeds known today. All dogs, from the German Shepherd to the tiny Poodle, are direct descendants of wolves. They can all breed together and produce fertile offspring. Technically they are of the same species. But before that, wolves descended from a species knows as the Tomarctus - a creature that roamed the earth over 15 million years ago. This is what a Tomarctus looked like. Not much of a Poodle, but certain canine features are indeed noticable... 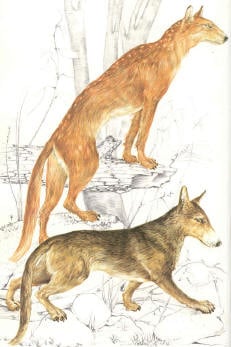