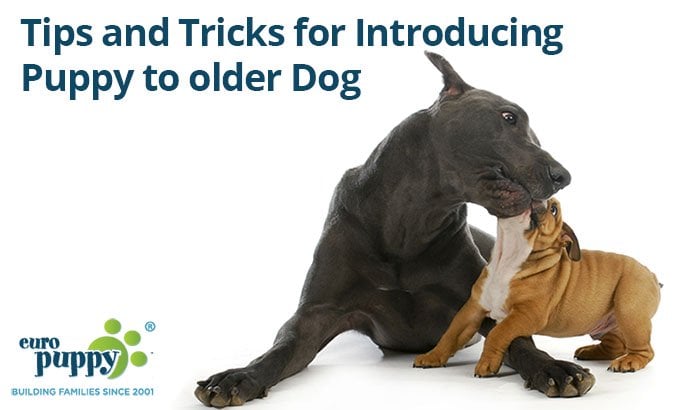 Introducing a new puppy to the home often brings bundles of joy to the household.

However, while this joy may be felt by the human occupants, the current and older canine in the family may not necessarily relish in the excitement.

While it is certainly possible for both the young pup and senior dog to form an instant rapport, more often than not, there may be some apprehension in the beginning. As the owner and master (the alpha leader), it is your duty to oversee the bonding or lack of it when introducing a new puppy to your dog.

The problem can almost always be traced back to poor canine communication. Often, a puppy that has been brought home from a mill has no communication skills beyond that with its mother and fellow litter.

As a result, it may not know “the etiquette” of canine communication. As such, its curious nature may cause it to behave in ways that are deemed intrusive by the older dog.

The initial contact is very important, so don’t force it and let both dogs go at their own pace.

When introducing new puppy to older dog, the biggest mistake 99% of owners make is having both dogs meet for the first time inside the house. This could make the older dog feel like its space is being invaded by an unwelcome youngster that hasn’t “earned its keep.”

Here is the right way of introducing a puppy to a dog.

Have the two meet at a neutral territory, such as a park. Walk one dog on a leash while having a friend walk the other. Allow the dog and pup to exchange pleasantries; which for canines, entails sniffing one another. Keep the interaction brief and separate the two after a few minutes.

This part is important because prolonged interaction can turn hostile especially if the puppy oversteps its boundaries by “disrespecting” the older dog. Such actions may include barking at its face, biting its ear or tail, or trying to hump the older dog.

Allow both dogs to interact for one to two minute intervals before separating them. During the interaction, be especially observant of the older dog’s body language.

Loose movements, tail wagging, an open mouth, and setting its front legs on the ground with its rear in the air are signs of playful behavior.

Tense movement, prolonged staring, growling, and exposing teeth are signs of aggression, and you need to immediately tug the two apart if such body language are observed.

Promoting Positive Bonding in the Home Once both dogs have gotten acquainted in the park, it’s time to bring them home where the two will be permanently sharing a living space.

Here is how to introduce puppy to older dog once both are in the household.

Begin by immediately removing all chew toys and food bowls. Canines generally do not like to share, and it can upset the older dog if it feels its items are being used by another.

Reintroduce these items after a week or two, and make sure the puppy has its own set of toys and food bowl. Speaking of food bowl, feed the dogs in separate areas as dogs are prone to aggression while they’re feeding.

Watch this video for a visual and narrative outline of how to introduce a new puppy to your dog. It includes a voiceover of how both the puppy and dog should respond when the former is brought into the household for the first time.

Don’t fret if the interaction doesn’t play out like in the video. Continue to monitor their body language and let the two do their own thing as long as there are no signs of overt aggression.

Once you learn how to introduce a puppy to an older dog and have put the steps into practice with positive results, then it’s time for the maintenance phase. Even dogs familiar with one another will get into occasional spats, so it would be foolhardy to expect everything to be hunky dory after the initial meeting.

Puppies are like miniature balls of never-ending energy, and the hyperactivity can be too much for the older dog that may wish to have some quiet time. This is why it is important to give the older canine an escape route. This is basically any place where the dog can retreat to where the puppy can’t follow.

By now, you know how to introduce puppy to dog. It’s now time to create a safety zone. There are several ways you can do this. The easiest way is to simply let your dog enter a room and then shut the door to prevent the puppy from following.

You can also install a pet door that is activated by a collar with a sensor device that you place on your older dog.

Always supervise your dogs, and the minute you recognize the signs of annoyance or aggression, have the older one go to its safety spot. You can also give it a treat immediately afterward to keep its nerves calm.

Even if no signs of aggression are observed, it’s still a good idea to incorporate a safety spot and use it regularly especially during the time of day when your pup tends to be the most active.

Refrain from too Much Scolding and Punishment

When a dog growls, it’s often a warning sign to back off or else. Unfortunately, puppies at this stage in their life may not understand this and may unknowingly push the older dog’s buttons.

If you observe growling from the latter, don’t scold it; instead, have it move into its safety area. You don’t want the older dog to believe that it is in the wrong for getting angry at the pup. The growling, in fact, will actually teach the puppy a very vital aspect of canine communication.

Reward Your Dog for Positive Behavior

While some growling is acceptable, you also want to reinforce the idea that it is better to back off than get aggressive. The key is to associate walking away with a reward. Most owners with obedience training experience have used the type of training where they reward their dog with a treat whenever it obeys a command. The same method can be done here.

Using a clicker may aid in the process; a clicker is a simple device that makes a clicking sound. Use a clicker in conjunction with a reward to help your dog associate an action as a positive behavior.

Clicker training can be of immense value when introducing a puppy to an older dog. Reward it whenever the dog voluntary excuses itself instead of responding with a growl. This will gradually help your dog tolerate the little nuances the puppy may bring.

Questions to Ask Before Adopting a Puppy Now that you know how to introduce new puppy to dog, it is time ask yourself whether your current dog can handle the excess energy of a vibrant pup. With the right training, most dogs can eventually warm up to the idea of having a puppy around the house.

However, factors like temperament and previous bonding experience with other dogs will determine how it deals with the situation. Your dog may require more or less work depending on these factors.

Be sure to ask yourself the following:

Factors like breed type and past conditioning also come into play. You know your dog’s personality and social skills more than anyone else, so you should be able to get a ballpark assessment of how your dog will react to the sight of a new canine occupant.

Asking these questions mark the first step when you want to know how to introduce a puppy to your dog. It gives you a starting point and what to reasonably expect.

Hierarchal Shifts in the Years to Come

Of course, introducing puppy to older dog is just the beginning. While the older canine may be the alpha male in the outset, hierarchal shifts may occur once the puppy becomes an adult.

Temperament changes as both dogs get older, and the younger dog may at some point begin to exert its dominance. This is why supervision is always a must even if both dogs have been living together for several years. Continue to have a safety area and utilize the clicker training method so that the wanted behavior wins out more often.

Bringing a new puppy home to another dog marks a big change for the human occupants and even more so for the current dog. While you shouldn’t expect an instant match made in heaven, you should have a positive outlook on the energy and joy a new puppy can bring.

Even if your dog doesn’t warm up to the idea right away, it will eventually adapt provided that you do your part as the owner. If you do your part with due diligence, then your dog may very well have a lifelong companion.

If adopting a puppy is on your horizons, then browse our puppy breeds currently looking for a home. This will help you find a breed that may be compatible with your existing dog.