Water Dogs – Some Intriguing Facts About Dogs and H2O

July 12, 2010 by Sandor Fagyal
Why do dogs love water so much? Well, scientists have discovered one intriguing possibility. It might be because, unlike humans, dogs can actually taste water. They do so via the receptors at the tip of their tongue, which they use for lapping up liquids. Interestingly, a dog's ability to taste water increases the more salt it eats. This is because salt heightens the sensitivity of the taste buds. It's little wonder then that the dog takes in so much water. An average do drinks no less than nine times a day. But it doesn't only get its supply of H2O from its water bowl. Half of the water a dog takes in daily comes from the food it ingests. There is a more practical reason why dogs need so much water, however. Dogs produce different types of saliva, some of which are very watery while others are richer in mucus. Scientists think the salivas perform different functions. The mucus, for instance, is better at breaking down meat while the watery saliva is more suited to digesting vegetables. So the chances are the more meat your dog eats, the less water he will drink. And vice versa. 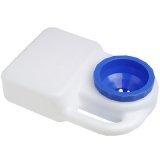