Why Do Dogs’ Eyes Glow in the Dark?

July 12, 2010 by Sandor Fagyal
You have most probably seen that your dog's eyes glow at night, like flourescent globes. Ever wonder why they do that? Well it has a rather simple scientific explanation. Dogs have a mirror-like layer of cells called the tapetum lucidum (bright carpet in Latin) at the back of their eyes. Humans do not possess these cells. The job of these cells is to improve a dog's vision in dim light. It achieves this by reflecting light back to the retina. The more light the retina receives the more information it has to work with to translate that light into images. So when you see your dog's eyes as glowing spheres in the dark, what you're actually seeing is light being reflected by the tapetum lucidum cells, so that images can be formed. Otherwise, without these cells, dogs would be unable to see at night. The eyes of many animals -including dogs - will also reflect yellow, green, or other colors in flash photography as well. It is called the "green-eye effect" or the "green eyeshine" in animals. In humans on the other hand, the opposite "red-eye effect" is a problem because, with no tapetum lucidum layer to block the light, it reaches the blood-rich region at the back of the eye and causes a brilliant red image of it to be focused back through the lens of the eye, giving even the nicest people red, glowing, demonic eyes in flash photographs. 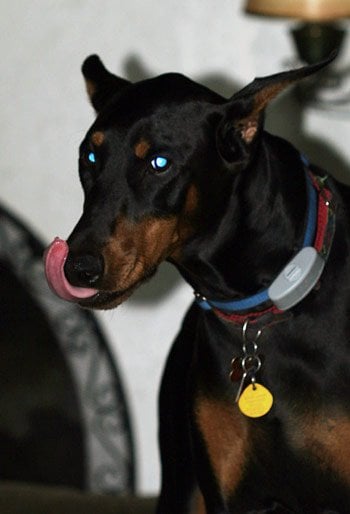