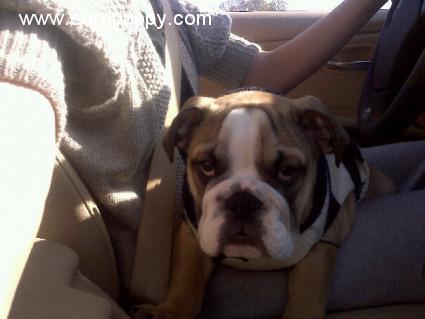 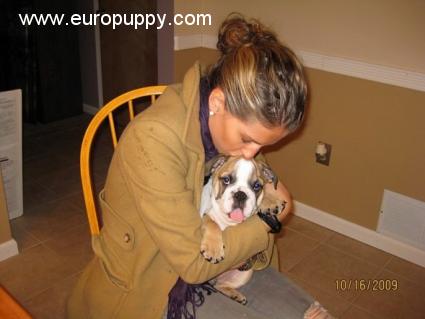 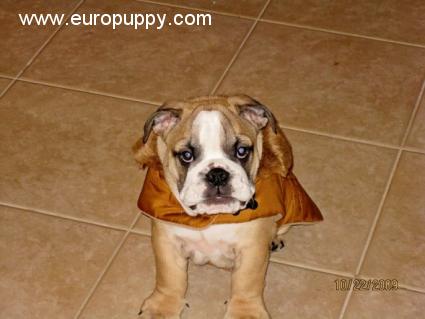 Our puppy is home with us and I could not be happier with the dog, as well as the process of it all. It took me a total of 10minutes to clear customs and get the puppy, now named Henry. He was very frightened at first, which was expected, but as soon as he warmed up to me he is better than I could have imagined. He is so sweet, loving and affectionate, as well as being a beautiful bull. He even has been going to the bathroom on the wee wee pads we laid out for him without even telling him, which was a wonderful surprise. He actually got a little on the carpet so I was cleaning it up with a napkin and when I put it on the floor he sniffed it, put it in his mouth, walked over to the pad and left the napkin ontop of it. I thought that was adorable and showed how bright he is already. I was planning on putting him in his cage to sleep, but I just couldn’t bear to part with him. He slept in between Brian and I and cuddled with us all night!

Thank you again and I will let you know how our vet visit goes on Saturday! If there is anything else I need to do please let me know. Thanks again, I couldn’t be happier!

My response to a customer inquiring about Mario and Euro Puppy USA!

Thank you for e-mailing me, I am more than happy to tell you quickly about my experience with Euro puppy.

For awhile I was researching, e-mailing and calling breeders. On my google search euro puppy was one of the first links that would pop up so I assumed it must be somewhat legit because I figured if it was a scam I it would have been reported and shut down. Even so, I was still a little skeptical and hesitant, but the picture of the puppy I wanted wouldn’t leave my mind. Reading the testimonials also helped me. So I called Euro Puppy just to find out a bit more information.

Without getting into too much detail, Mario was more than helpful! He was always there to answer my questions, comments and concerns and tried his hardest to get me the puppy I wanted as fast as he could. Service is key with this company! I ordered my mini bulldog on a Monday morning and I was told he would be ready for pick up at the airport on Thursday!

In the few days in between, Euro puppy kept in contact with me via phone and e-mail with updates and flight information. They took me step by step in order to for me to pick up my puppy from the airport, which was extremely easy. Once the airline itself gave me confirmation I felt even better.

On that Thursday, I got to the airport and went to the Cargo building and asked if a puppy arrived and they said yes. I was so relieved just knowing that this really went through and he was actually there. It took a total of 10 minutes to put his paperwork through customs and have him cleared and in my arms. Of course the puppy was scared from the whole experience so I just wrapped him up in a blanket and held him until he calmed down. From then on he wouldn’t leave my side, he was immedately at home.

I took him to the vet that Saturday and showed them the paperwork (including his puppy passport) that Euro puppy provided and he was up to date on his shots and after examining him and a stool sample they said everything looked great with him. I brought him to the vet again a couple weeks later to continue with his vaccinations (they all love him). I honestly couldn’t be happier with the dog. He is the sweetest, gentlest, most loving dog and I’m so happy with the whole process.

I’ve ALWAYS wanted a bulldog and he is my first puppy as well. I’ve had him for a month now and I love him a little more each day. My only problem is leaving him in the morning when I have to go to work. He’s so damn cute it is near impossible to leave, but leaving work is that must sweeter because I know I have him to come home to.

Of course I was nervous and a little skeptical since I never heard of this company, but now that its said and done I would recommend it to anyone. My ex-boyfriends mother is a breeder and I have done a lot of research, so if you decide to go with a bull from there feel free to contact me with any questions you may have! Bulldogs are a good amount of work that require lots of attention, maybe more so than other puppies since they are a special breed, but I’m sure you know that. They are certainly worth it! Good luck and hopefully I helped your decision! I’m going to attach a couple pictures of Henry, my bulldog!

P.S. – Henry was easy to potty train as well as basic commands such as “sit” and “paw.”