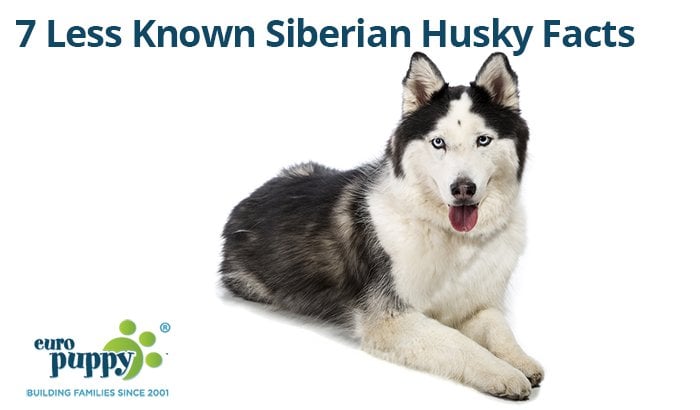 Siberian huskies are known for their majestic qualities. This is a breed that is truly loyal to their owners while embodying the traits that define a loyal canine companion. Of course, when one think of huskies, images of sled dogs and an Eskimo often come to mind.

However, there is far more to this dog breed than what the typical stereotype implies. At Euro Puppy, we provide all the information you need to know to understand what makes the Siberian husky a truly one-of-a-kind breed, ranging from its behavior to its origins.

Huskies completely shed their undercoats twice a year. The shedding period usually lasts three weeks but can go on much longer. Do expect to do a lot of grooming and vacuuming during this period. The good news, though, is that you only have to put up with it twice a year.

No further maintenance is really needed outside this period other than an occasional brushing, bathing and removing dead fur.

Yes, huskies look like wolves and appear as if they can quickly make a would-be intruder regret his decision. However, the term “gentle giant” applies almost to a perfect T when it comes to the husky.

Unlike other species, such as the pitbull, doberman, or cane corso – all of which are rightfully feared for their aggressive behavior – huskies simply do not have that tendency.

This is not to say that huskies will never go into attack mode. Factors, such as their upbringing, genetics, and past experiences all come into play when it comes to a husky’s demeanor. For the most part, though, they make great companion pets for owners with young children who would like to have a large canine around the home.

Looking for Siberian husky fun facts? Here’s one: There is a Houdini in every husky. Whether you confine them to a room, patio or in a kennel, huskies will try to find a way to get out, and they will usually be successful at it. Watch this amazing video of a husky using ninja-like skills and precision to escape over a chain link fence.

If you think that was a lucky escape, then check out this equally astonishing husky kennel escape video.

It’s important to note that huskies do not have an innate need to break out of its confines. If your husky frequently attempts to escape, then it is simply under stimulated and wants more space to roam around.

Of course, you should still take extra precautions to make sure that your furry friend doesn’t outsmart you. For enclosures, make sure that the fence is high enough and does not contain large rocks, decors or anything that your dog can use as a boost. Also be sure that there is enough concrete under the fence to prevent your husky from digging its way out.

Huskies are very independent minded but will quickly become compliant to an owner who is able to establish himself as the alpha leader.

The key is to set boundaries and make it be known that you are the master. To establish yourself as such, here are some Siberian husky training facts to consider:

You will also need to become acquainted with some basic Siberian husky health facts in order to know the maladies and sicknesses the breed may be prone to.

Some diseases huskies are susceptible to include cataracts, hip dysplasia, and degenerative myelopathy. Be on the lookout for unusual behavior that may indicate discomfort or distress and take your dog to a vet the minute you notice telltale symptoms.

Siberian Husky Fact #5: Huskies Are Perfectly Capable of Being Potty Trained With the Right Technique

Here are some Siberian husky facts and information for first-time owners: they can be potty trained but it is going to require some work and patience. Do expect to use your pooper scooper indoors during the first few months of training. Of course, every husky is an individual, so the one you bring home may require more or less training.

It is also important to point out that regardless of where the husky was previously raised - whether at a puppy mill or a free-roaming environment - all are capable of being potty trained.

There is a recurring belief that those raised in a mill are somehow more inclined to do its business indoors. This is simply a fable; like children, some puppies are just easier to teach than others and has very little to do with where it was previously brought up.

When it comes to potty training a husky, the earlier you start the better, though a husky can be effectively trained at any age provided that it’s healthy. Like training a dog at anything, the key is to use repeated conditioning.

This means rewarding it whenever it answers nature’s call outside and scolding it when it makes a mess inside. Be patient; just as training another dog or even a child, expect some hits and misses in the beginning.

​If you want to learn more on the topic, here's a great husky potty training video by our friends over at Gone to the snow dogs.

Siberian Husky Fact #6: Huskies are NOT Related to Wolves

Huskies bear a strong resemblance to wolves and have even been portrayed as such in movies. However, according to the Siberian Husky Club of America, they are a domesticated purebred dog with no genetic lineage linking them to wolves.

Here are some other Siberian husky habitat facts to consider: Their origins lie in northeastern Asia (present day Siberia) where they were bred by the Chukchi people and prized for their strong endurance abilities.

They were eventually introduced in Alaska in the early 1900s and partook in racing competitions, the most recognized of these races being the Iditarod Trail Sled Dog Race that is still held annually to this day.

Siberian Husky Facts #7: A Pack of Huskies once Saved an entire Town

One of the most amazing Siberian husky interesting facts stems from their early history, in which a pack is credited with the emergency rescue of a small town in Alaska. The incident occurred in 1925 when a plane was unable to deliver anti-serum medicine to the town of Nome due to a blackout.

Officials then enlisted the help of over 150 husky sled dogs that traveled nearly 700 miles in five and a half days to bring the medicine to the endemic-ravaged town. The successful journey saved the lives of several Inuit children who were showing severe symptoms of diphtheria.

Balto, the husky that led the pack, became an instant canine celebrity and the most famous Siberian husky to ever live. After Balto’s death, its remains were mounted by a taxidermist, and its body today can be viewed at the Cleveland Museum of Natural History.

There are many Siberian husky facts and pictures both in print and online if you wish to learn more about this dog breed. Look up these sites for more in-depth and specific information:

Due to their origins, history, and demeanor, huskies have taken a very mystical-like quality that make them the excellent companion whether you plan on racing them or just want to raise them as a pet. Either way, this is a breed that is held to high esteem and for good reason.

With its gentle and friendly nature, a husky will make a terrific animal companion, though it will feel more like an extra member of the family rather than a pet.