What is a Teacup Puppy?

July 12, 2010 by Sandor Fagyal
"Teacup" is a weight category which means 4-pounds or less. Teacup puppies are not common. Research has shown that Teacup births are substantially less than 1% of all dog births. Teacups, when compared to the general dog population, are very rare - and the demand far exceeds the supply. Teacup puppies have always existed and it seems like they are more prevalent today because of all the publicity they have gotten recently as a result of their celebrity owners. Teacup puppies are as expensive as they are, because they are difficult to breed, and they require a lot of extra attention at birth. Since they are so fragile, often weighing 2-4 ounces at birth, they require a lot of care and 24-hour attention for 2 or 3 weeks. Secondly, since the demand is so high for Teacups, with demand far exceeding supply, the price is higher. The benefits of owning a Teacup puppy can be mostly attributed to their small size. Teacups are extremely portable, making them great traveling companions for everyday activities like going to the mall or dining out. Airline companies also allow Teacups to travel in the main passenger cabin as opposed to bigger dogs that are required to travel in the cargo area of the plane. Teacups are great for senior citizens who cannot lift heavy dogs, and they are great for apartment owners because they don’t need to go for walks - an apartment provides all the exercise space they need. Many dog owners equate a Teacup puppy to having a dog that always remains puppy-sized. And the life expectancy of a Teacup puppy? Well, contrary to popular belief, a Teacup puppy will often live 15-20 years, which in many cases is a better life expectancy than that of bigger dogs. Teacup Puppies in Japan A pet shop in Japan is breeding teacup-sized puppies to meet the popular demand from the market. These would be the canine equivalents of Bonsai trees! The pictures show little “Teacups” at age 3 weeks. Current weight of these puppies is 150 grams (5 ounces) and they are estimated to weigh approximately 1.5kg (3 lbs) as adult dogs. Buyers are willing to pay up to as much as USD 5473 for this small-sized puppy. 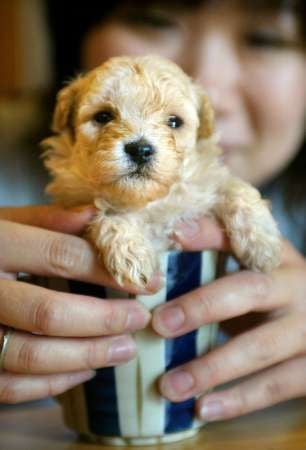 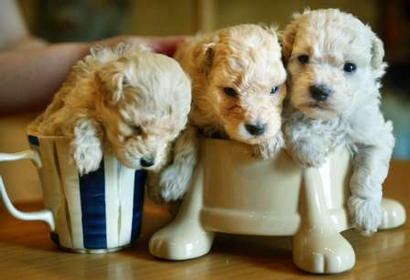