Can you train Cavalier King Charles Spaniels as Bird Dogs?

Thank you for visiting Euro Puppy and for your query.

This can be a touchy subject for a lot of people. And to be honest most do not want to see their dog with a bird in their mouth. But for some dog owners, birding is an important quality, and for some dogs it is an inherent skill. Dogs were wolves once after all!

Concerning Cavalier King Charles Spaniels as bird dogs…let me explain a few things, before I can answer your question...

The Cavalier King Charles Spaniel is an interesting breed since it is first and foremost a companion dog. Even the FCI registers it in the 9th group, which is designated for companion dogs. All the other spaniels belong to 8th group as designated by the FCI. This group is for the spaniels that are more hunting / bird dogs.

So at first glance you would assume that the Cavalier King Charles Spaniel is the least appropriate Spaniel to have as a bird, or hunting dog.

A Cavalier, however is in its element if it is around people and family members. Therefore it is a companion dog.

However, not so fast! Like all Spaniels, the Cavalier also has a genetic background of being a hunting dog…or a gun dog /bird dog since it was used to retrieve birds and game. So there is potential here... 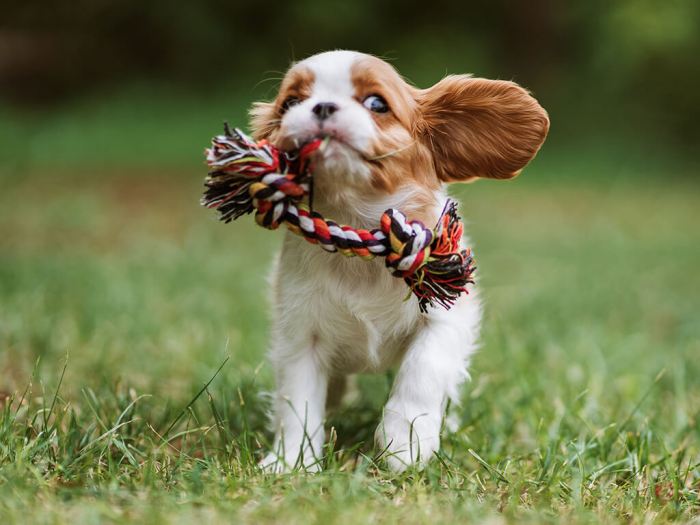 Of all the Spaniel breeds, the original Cavalier is the only one that has developed into a lap dog and therefore its hunting instincts have quite drastically been hindered. Most Cavalier puppies will not have an innate desire to go hunting.

The other Spaniels, like the Springer Spaniel or an American Cocker Spaniel are also great family dogs, but their hunting, bird dog instincts are far greater. It has been less diluted in the bloodlines, and they are still today used for such activities.

Cavaliers, however have been known to catch small birds in mid-flight that fly too close to the ground.

Such behavior is a result of their earlier use as a hunting dog, and as such, they can develop habits that predispose them to chase small animals such as chipmunks, squirrels, etc. Even selective breeding by clever breeders, using Cavalier less prone to hunting over the years, cannot completely remove this trait.

Because of this, it is recommended that care should be taken when walking a Cavalier off-leash, as they can single-mindedly chase a butterfly or squirrel onto a busy road or other dangerous situations without regard for their own safety if not properly trained.

The energy of a Cavalier King Charles Spaniel comes from its hunting genes and latent hunting instinct. Although it is a perfect companion dog. Because of this very same energy and drive, it needs to be exercised just like other Spaniels.

However there are other Spaniels mentioned earlier, and hunting breeds like Vizslas and Pointers make perfect bird dogs. Therefore it is advisable to rather keep the Cavalier as a companion dog, and if you are keen to have a bird dog, then choose a bird dog, that is really a bird dog in spirit, in habit and in genetic make-up as well.