Snow or Rain? Here’s How to Exercise Your Dog Indoors 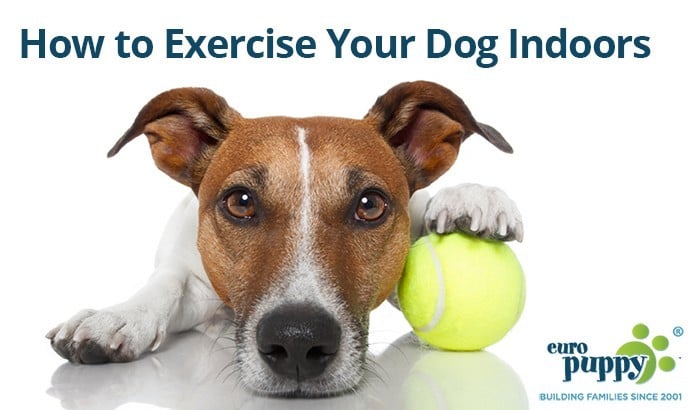 At Euro Puppy, we always stress the importance of canine physical activity.

Dogs, after all, are prone to weight gain and diabetes just like humans are. Sometimes, though, an outdoor workout just isn’t possible due to prohibitive weather.

However, even if it’s raining cats and dogs outside (pun intended), you can still give your canine friend every bit as much of a kickass workout.

Knowing how to exercise your dog indoors will allow it to stay in shape even if the indoor space is the only room you got.

Sure, a little improvisation is in order, but it’s no less in quality, and your dog just might appreciate the changeup.

1. Run Up and Down the Stairs

If you have a flight of stairs in your home, then use it as an exercise aid. Start from the top of the stairs and throw a tennis ball down to have your dog fetch it. The minute it snatches the object in its jaws, call out its name for it to come to you.

The exercise, in this sense, doubles as obedience training since it conditions your dog to listen for your commands.

After several repetitions, you can repeat the exercise starting from the bottom of the stairs.

Dogs have a natural instinct to hold tightly to whatever item is in their jaws.

To help your canine burn some energy and get a good jaw workout in the process, have it fetch an object like a thick piece of rope and then try to snatch it away by grabbing at the other end of the toy, which will prompt your pet to fiercely cling on to it.

Even if your dog growls in the process, it is not angry and merely grunting to release energy.

It is important, however, to be the victor of this game. This means you need to be the one to successfully snatch the item away and not let your dog make off with it.

Of course, this may be easier said than done against larger dog breeds. However, being the constant winner shows your dog that you’re in control and the alpha of the pack.

If you have an existing agility course set up outside, then perhaps you can bring it – or at least some of it – indoors.

Basic household items can also be used as makeshift training tools. You can, for example, hold up a hula hoop and get your dog to jump over it. Other items like chairs and cardboard boxes can also be used in creative ways.

If space is limited, then consider moving the car outside and using the garage for setting up the course.

Come meal time, instead of placing its food in its food bowl, make it work for its food.

One of the best ways to do this is by using a food puzzle. This comes in many varieties and is usually in the form of a hollow chew toy.

Kibble can be placed inside, and there are holes that allow the kibble to come out one at a time. To get the food out, your dog has to use a combination of its jaws and paws to get the kibble out.

There is another creative way to do this if you don’t have a food puzzle. Take a cupcake pan and place kibble in each slot. Place a tennis ball over each one. This forces your dog to have to manually remove the ball in order to access the treat. You may have to hold the pan down to prevent the dog from knocking the whole pan over.

A treadmill is just as good of an exercise as walking your dog. In some ways, it’s even better because it gives your dog the workout without all the distractions.

It may take some time to get your dog accustomed on a treadmill, so start at a slow speed and entice it with kibble to keep it on the moving belt.

Once it gets used to it, you can make treadmill walking or running a regular part of its exercise whenever it’s too hot or cold outside. You can even use the incline adjustment to give it more of a challenging workout.

6. Use a Weight Vest

Weight vests for dogs are a good way to make your canine walk around with additional weight. This helps it increase its stamina and endurance.

If a weight vest isn’t available, then simply tie a heavy item, such as a weight plate, at the end of its leash. If you use this method, however, then attach the leash to a dog harness instead of a standard collar. This way, the weight is carried evenly throughout its body and not entirely around its neck.

Also, be careful not to use too heavy of a weight or else your dog may just decide to sit or lie down instead of exerting the extra effort.

7. Use a Laser Pointer

A laser pointer game is a fun indoor exercise for dogs. Like cats, dogs have an instinct to chase anything bright and shiny.

Simply point and move the laser around the house to make your dog chase after it. Point the laser using quick but steady movements so your dog can keep up with it.

The beam should also be moving by the time your dog reaches it. Be careful not to point it directly at its eye or else you risk damaging its retinas.

Also refrain from pointing it at a wall to prevent your dog from crashing against it.

The dog version of a push up is different than how people do the exercise.

Have your dog perform several repetitions of pushups by repeatedly commanding it to lie down and sit. In the beginning, reward it with kibble with each successful repetition and slowly wane off the treats as it becomes accustomed to the process.

Believe it or not, the simple act of chewing is actually one of the greatest ways to exercise your dog indoors. Dogs actually burn quite an amount of energy just by using its powerful jaws.

Plus, since dogs do this naturally, there is virtually no effort on your end. To avoid boredom from endless repetition, have a variety of chew toys around the home.

Occasionally, you can also give it a flavored rawhide bone; however, only do so in moderation as such bones often get its flavor from artificial preservatives and additives.

Just because it’s too cold to exercise outside doesn’t mean you have to remain cooped up inside the home. If possible, take it to a local pet-friendly pet shop and just walk it down the aisles several times.

While this might seem like a mundane activity, your dog will appreciate the change in environment and enjoy taking in the new smells and sights. You can also buy it a new treat or chew toy to take home.

There are plenty of indoor games for dogs to challenge your canine friend for those days when the temperature is simply too frosty for an outdoor exercise session.

This will keep your dog stimulated and conditioned both physically and mentally.

This will also prevent it from expending its energy in unconstructive ways, which can be quite destructive to your home.