July 12, 2010 by Sandor Fagyal
Any serious dog lover is at home with the term “Schutzhund”. But those dog lovers who are proud owners or fans of the German Shepherd Dog can vouch for the fact that Schutzhund is an imperative part of dog training and socialization.

Schutzhund, which is a German term meaning: "protection dog", tests a dog’s desire to work, his courage, his intelligence, his trainability, his bond to the handler, his perseverance and his protective instincts. There are several tests and trials that must be accomplished to pass Schutzhund. In fact it is taken so seriously in Germany that a German Shepherd cannot even be bred unless is passes Schutzhund.

What is the importance of Schutzhund?

Dogs that pass Schutzhund tests should be suitable for police work, specific odor detection, search and rescue, and many other tasks. The purpose of Schutzhund is undeniable when used with German Shepherd Dogs, since it also identifies those representatives of the breed that have the perfect character traits required for these demanding jobs. It is not surprising that police worldwide use Schutzhund with German Shepherd Dogs, to see if the dogs they have chosen can excel at these very demanding tasks. Interestingly enough, most police departments do not allow their working dogs to breed. This is also true of many other organizations that use working dogs. The breeding stock for these working dogs is Schutzhund dogs. Without Schutzhund, the working ability of German Shepherd Dogs and other working breeds would quickly deteriorate and it would be difficult to find suitable dogs for police work, bomb detection, or search and rescue. 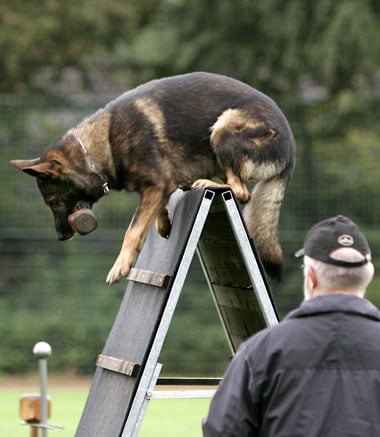 Is Schutzhund only for German Shepherds?