Home   /   Blog   /   How Much Socialization Does a Golden Retriever Need?

How Much Socialization Does a Golden Retriever Need? 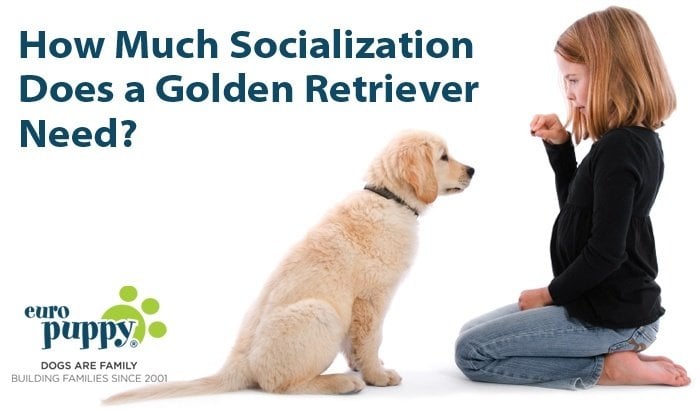 Well, actually no, that isn’t entirely true. But hold on, don’t panic! This doesn’t mean they need endless amounts of rigorous socializing either, in fact just a little effort really can go a long way.

While it is true that Golden Retrievers are one of the best breeds in terms of temperament and friendliness, you absolutely shouldn’t take this for granted. Simply put, socialization does not happen on its own. A young puppy not properly introduced to new surroundings, people and animals, can develop bad behavioural problems later on, something no owner wants.

Puppyhood is the most vital period for a dog’s development, if you get started straight away, not wasting a day, socialization will leave a lasting positive impact on your dog. Leave it too late, and you may have a Golden Retriever that becomes suspicious or afraid of new places, animals or people. Introduction to other animals under careful supervision helps the pup learn to be calm around them.

As soon as you have your new beautiful cuddly Golden Retriever pup, you can start introducing him or her to new (friendly) dogs and other animals, and new (friendly) people, ideally in the house at first then gradually outside too. This helps them experience different types of people and animals, so a grown up dog won’t be spooked or aggressive towards anything unfamiliar.

Taking your pup on short car journeys and taking them around busier places, whether in your arms or on the lease, helps them get used to different environments and to the collar and leash system.

In fact it is the friendliness of Golden Retrievers that, if not socialized properly, can cause issues later. A pup not taught early to control themselves with family or strangers, could lead to a large strong dog that will jump up at, or playfully (and painfully!) nip people’s fingers. Most Golden Retriever pups generally grow out of these habits, but we don’t want to see Granny knocked down by a big over excited Retriever! They may look cute, but those teeth are sharp!

﻿Remember to never overwhelm a pup with new people and places as it can tire and frighten them, just do it slowly, but frequently over those early weeks. A Goldie will usually accept these socialization steps very quickly, and a puppy that has experienced everything life has to throw them early on, will be far less likely to be timid or aggressive in the future.﻿

A little effort in those first wonderful weeks with your new Golden Retriever, will reward you with a happy, stable and friendly dog in the years to come.