A guide to Choosing your Dogue de Bordeaux puppy!

Many of you may have seen the the sloppy star of an American film named Turner and Hooch, which had Tom Hanks in it. Well, I can tell you that not until this film came out, did this breed attain much recognition outside of France where it originated from many centuries ago (hence its other name, French Mastiff and the region it’s from, Bordeaux).

So we wanted to provide some useful tips as a guide to help you make an informed decision if seriously contemplating choosing a Dogue de Bordeaux puppy.

Is a Dogue de Bordeaux a good choice for you?

The Dogue de Bordeaux does not need so much exercise (A daily walk and a bit of light play is usually sufficient as it’s a heavy breed) and is not so athletic. But its messy eating manners, drooling and large size make it a difficult, but not impossible dog to keep inside a home. Ideally a small yard is better suited to it as well as non-extreme hot and cold weather conditions. 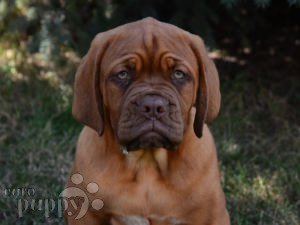 A Dogue de Bordeaux can posses formidable traits, such as relentless strength, wariness of strangers and an inclination to intimidate unknown people. This makes it a first class watchdog and has a natural instinct from a young age.

The French Mastiff is suited to an owner that is prepared to spend plenty of quality time, and has a real enthusiasm for this large, fast learning and impressive looking breed. It is often said for good reason, that this breed is best in the hands of an experienced owner.

This breed can be aggressive to other dogs especially males, if not socialized properly. A dominant alpha male can be a hard nut to crack, and good socialization is needed. Neutering can settle it down too. It can be very warm natured with other pets in the home that it knows.

The French Mastiff needs early socialization and obedience training is recommended whether male or female to alleviate future problems. This is very important! A shy or reserved Mastiff due to lack of socialization is not good.

Many owners will find a female Dogue de Bordeaux cleaner (not marking its territory on every available occasion) and easier to handle with a more relaxed/submissive disposition. This would make for a possible better family choice, while the male as a courageous guardian.

The male being noticeably bigger as a rule, highlights better the true DDB traits, which is a big draw card for some. Some males may even get up to 75kg (165 lbs) as big, lion-hearted and looking Carlo below! 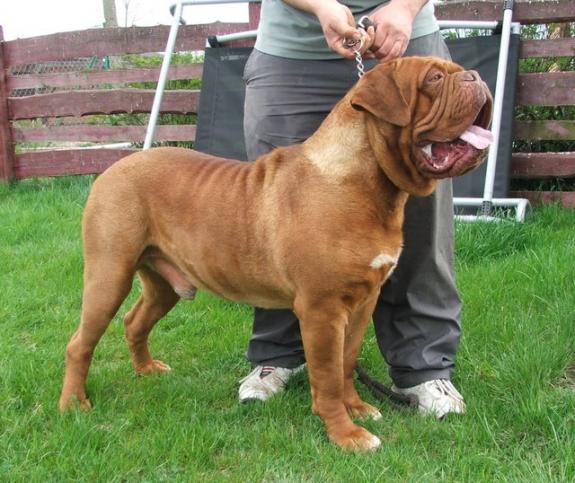 What Colour Dogue de Bordeauxs are there?

French Mastiffs come in several shades of fawn from light to dark. They can often be described as red and rust, and the deeper, richer the colour, the most desired usually. However, some people prefer light fawn, and this shade should not be overlooked if other traits are positive.

Solid colour is popular, but there can be white on the tips of their toes and a patch on the chest, nowhere else. Many people like this also, so it’s just a matter of personal preference of course.

What is the perfect Dogue de Bordeaux Conformation?

However, conformation is very important and here are some traits to notice when buying your Dogue de Bordeaux puppy (Although changing fast at a young age, these early traits are likely to be carried through). Good puppies usually have plenty of facial wrinkle on a large proportioned head and some loose skin on the body.

A downside to this wrinkle is that more care and cleaning is required by the owner as it can lead to problems such as skin infection. A short, furrowed muzzle on a puppy is an important factor to look for along with a dense/thick bone structure and deep chest.

Being a large breed, it should take a rectangular shape, but not to be as long as a train so to speak. Many people look for large feet as an omen for big things to come.

Early large size can also have a downside as too much weight on the legs and hips at this important growing stage can lead to problems such as dysplacia later (HD/ED). Seeing both parents (dam and especially sire) is beneficial as they will give good foresight to how your puppy will look fully grown. Below is a pup that illustrates many of the important characteristics to look for.

As a guide, Just start at the head and then work your way over the bone structure.

This is one breed where there is a vast difference between top and bottom shelf and there is no shortage of not so good looking dogs out there unfortunately. It is neither a cheap dog to buy (1800 USD upwards usually) nor care for.

There is a tendency that the best Dogue de Bordeaux puppies come from Europe or have strong European heritage.