The Rottweiler is an infamous dog breed, and mostly for the wrong reasons. Often given a bad press as an aggressive and dangerous breed, yet in many ways this couldn’t be further from the truth. It is time to dispel the myths that surround this breed and to show some of the wonderful qualities that the Rottweiler is endowed with. Here are some top Rottweiler facts.

Ancient Work Effort of the Rottweiler

It is believed that the Rottweiler dates back to the Roman Empire and is a descendent of the ancient Roman drover dogs, which like the modern Rottweiler were big, dependable, rugged dogs with great intelligence and natural guarding instincts.

As the Roman Empire spread across Europe, they took herds of cattle with them, which the ancient Rottweilers guarded at night, from Barbarian theft. Later, even after the Romans were driven out of modern day Germany these dogs continued to be used to herd cattle.

So from their earliest days the Rottweiler was a working dog. This has continued up to the modern day. They were used extensively in both World Wars as guard dogs, police dogs and messenger dogs. This working instinct is a strong indicator of the extremely high level of intelligence the Rottweiler commands, something most people do not realise.

Apart from making great police dogs, Rottweilers make great protection dogs as well! The Germans gave them the name of: “Schutzhund”, which in German means: "protection dog". It also refers to a sport that focuses on developing and evaluating those traits in dogs that make them more useful and happier companions to their owners. A Rottweilers mental stability, endurance, structural efficiencies, ability to scent, willingness to work, courage, and trainability are brought to the fore. A trained Rottweiler- like any other working dog that possesses mental stability - has trust and confidence in itself, allowing it to be at peace with its surroundings.

A Good Natured Giant in the Right Hands! 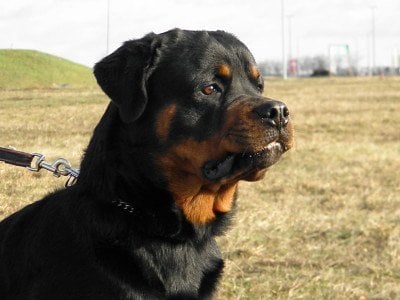 Many people have completely the wrong idea about Rottweilers! According to the FCI Standard, the Rottweiler should be good natured, placid in basic disposition, very devoted, obedient and eager to work.

Nowhere does that mention aggressive or violent! Nevertheless we repeatedly hear about attacks and violence from Rottweilers. Well first things first, don’t blame the breed. It is sadly mostly down to bad ownership, and because of the inherent strength of the breed, a badly trained dog can do a lot of damage. With proper and effective socialisation and training the Rottweiler should not be violent!

This breed has a strong protective instinct, which makes them naturally suspicious towards strangers. So they need extensive exposure at a very early age to friendly people, so that they can recognize normal behaviour.

Without socialisation a Rottweiler can become suspicious of everyone When training a Rottweiler, you must be assertive and strong minded as most can be inclined towards trying to dominate. So be firm in your obedience training. The Rottweiler breed is only recommended for people who will have the time and patience that training this powerful breed takes and who are capable of displaying strong leadership.

You may think that this breed requires brutal training techniques, but that couldn’t be further from the truth. As mentioned above, the Rottweiler learns to read their owner's emotions and body language over time, so a firm voice and a strict facial expression will get you more results than brute force.

Due to their keen observational skills one of the least known Rottweiler traits is their sensitivity to human emotions and behaviour. For instance if you are out in the park with your Rottweiler by your side and a stranger approaches you, your Rottweiler is likely to observe that person, wait for your reaction and relate to the stranger on this basis. So if you treat the person as a friend, your Rottweiler will also pull a friendly face, but if you become alert and nervous, he will be on his guard too. Few other dogs have this capability, and it is another useful way of training your dog.

You cannot give your Rottweiler too much to do! They thrive on being kept busy. This trait is an asset, but can be a liability at the same time. If your Rottweiler has nothing to do for a long period of time, it will get bored and potentially destructive. The Rottweiler therefore needs plenty of exercise, with at least a couple of daily walks or jogs. They also tend to enjoy swimming, and like nearly all dogs love playing fetch with a ball.

One thing to watch out for is the breed's high prey drive. A high prey drive means that the rottweiler likes to chase anything that moves fast. This was actually a very positive trait when Rottweilers were used for herding livestock, or when they were fighting alongside Roman legions. But today, their prey drive is considered a disadvantage, but with effective obedience training can be subdued.

Despite being generally undeserved, this breed is not one many people enjoy seeing and sadly have been banned or restricted in certain areas. These include, but are not limited too: Spain, France, Italy, Romania, Israel and Portugal. So before you decide you have what it takes to own and raise a wonderful Rottweiler, make sure it is possible to have one in the first place! And if so, check out if there are any other restrictions. It is time that this wonderful breed had its reputation restored and it should be made evident that it is bad ownership that has caused the problems.

Finding the right source for your Rottweiler is vital too, as irresponsible breeding has only added to the Rottweilers unpopularity. Too many people have been breeding Rottweilers to be dangerously sharp, believing this will increase their protective nature. But this has only made them more aggressive. So only choose from a breeder you know is honest and reliable. At Euro Puppy we only work with the most responsible Rottweiler breeders! 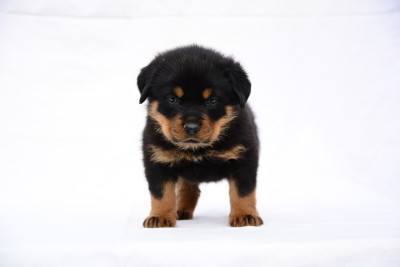 Owning a Rottweiler can be a fantastic experience. They are loyal and loving to their owners, and are excellent as working dogs or guard dogs. But there is no doubt about it, there is extra responsibility to being a Rottweiler owner. They are a big and powerful dog and are sadly mistrusted by many.

You must make sure you choose a Rottweiler that has been bred well, and ensure you have the time to thoroughly socialize and train your puppy, and give it the regular exercise and tasks that it needs to be happy. If you have thought it through and believe you have what it takes, you can show the people around you what a wonderful breed the Rottweiler is, and begin to restore their reputation!