The Bully Whippet: The World’s Worst Genetic Mutation in a Dog

No, this dog does not have Arnold Schwarzenegger’s genes and no ….she hasn’t even spent a day at the gym. That’s right. She. Meet Wendy. The Whippet.

Not exactly the most feminine representative of her breed, Wendy is a result of a genetic mutation. I first thought she was the best altered digital photo of the century, but (sadly?) she is real! Wendy - the dog whose appearance is a long way from the usual long, lean and sleek look of her breed- lives on a farm in Victoria, Vancouver Island, Canada and is what scientists refer to as : “ double-muscled” or a " Bully Whippet".

Due to the genetic defect, nature rewarded her with twice the muscle size compared to the other representatives of her breed. Resembling the cross between Schwarzenegger and the Incredible Hulk, Wendy still has the heart, lungs and head of a normal-sized Whippet. Only her musculature is twice that of her breed. 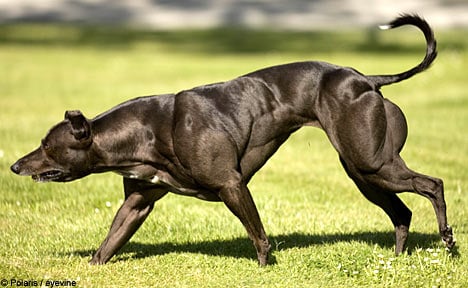 Her weight is 4st4lb (28 kg). It doesn’t sound that bad, but it is twice that of the normal weight of a Whippet. Her neck muscles, rippling shoulders and huge hindquarters would be the envy of any body-builder on steroids.

Although her looks raise a lot of eyebrows, she is unaware of her large size and mutant form and is happy and even under the circumstances, a healthy Whippet. Her proud and loving owner, Ingrid Hansen says: "She doesn't know she's got a genetic defect. She might give you a nasty lick, that's all." She doesn’t have more testosterone than other normal Whippet females and is not aggressive at all.

Sadly, with her genetic defects, 4 year old Wendy might not live for too long. Although the fellow dogs in her breed are bred for hunting, racing and showing, Wendy enjoys a slower pace of life. Geneticists have even examined her to find out why she developed this defect. They found two mutated Myostatin genes. Myostatin is a growth protein that limits muscle tissue growth. 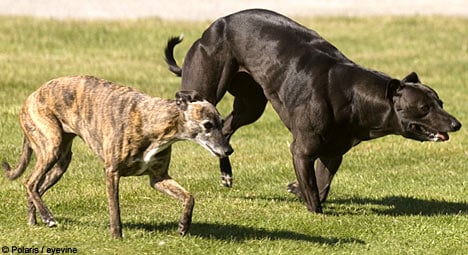 She likes nothing better than to spend her days prowling around the fields, chasing (or scaring?) other dogs and horses and sleeping on her owner's bed. Although she is a pedigree, who is fondly nicknamed Arnold Schwarzenegger, she would probably never win “best of breed” at any show.

Believe it. She’s no hoax. Hansen, the owner, has received calls from media around the world, including the Japanese television, the New York Times and the National Enquirer. Wendy really is one whopper of a Whippet! Nature works in mysterious ways…

It seems even the fastest Whippets have a mutant gene for the Myostatin. Bully Whippets, like Wendy have 2 genes for this mutant gene. It takes breeding two fast Whippets to bring out the bully in them, it seems.... 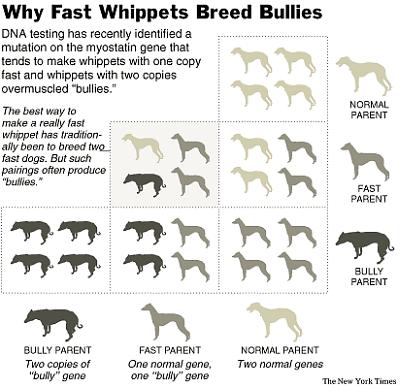 And we at Euro Puppy thought only our Rottweilers and Neapolitan Mastiffs are huge! Wow...
Share:
Tweet