How to Choose your French Bulldog!

Everybody recognizes the French Bulldog! With their crinkly bodies, funny faces and famously happy, silly natures, they are one of the most popular dog breeds out there. In fact, in recent decades, they have been right near the very top of the popularity lists!​

Okay, you’re here reading, so you are probably seriously thinking about buying a French Bulldog. But just before you do, you might want to take some of the following points into consideration to make sure you get the one that is the most suitable for you. After all, it’s a big decision, and the better informed you are, the easier the choice.

Their are lots of questions about your lifestyle and the care requirements a Frenchie needs, but this article is here to help you after you have considered these questions. We want to focus on which Frenchie is right for you!

Men are from Mars and Women from Venus, the gender issue. Although usually clownish and sweet, this breed can exhibit same-sex aggression. This is more likely to be with 2 intact and full-blooded males, but not totally limited to them.

If you already have a male in the household you may think of getting a female, especially if he is a little dominant. This makes it not easy, but early socialization in the puppyhood will help to alleviate future problems whichever sex you decide on.

Generally, males (even more so if intact) are a little more rambunctious than females. This suits many people as could be argued as having more character and get up and go.

Of course if there is a female and the male unneutered, you may have to keep them apart for certain times of the year if you catch my drift. As you know or will learn quickly, turn your back on them and they will take full advantage of the situation (Frenchies are opportunists).

They are also considered as being nicer in look as the typical French Bulldog traits are more pronounced (you will read more about this below). Females, on the other hand don’t cock their leg on every 2nd upright thing to mark their territory and often people find them cleaner and sweeter in character. 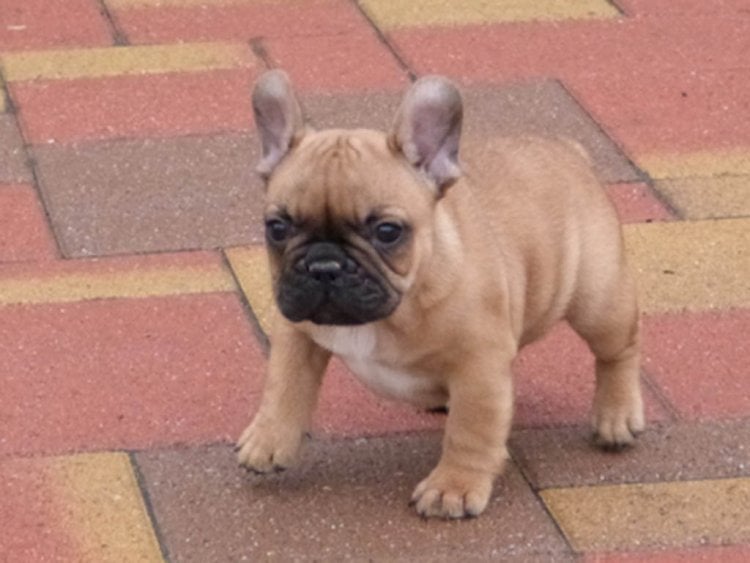 Frenchies are getting rather colorful these days. Some variations:

* Pied means having patches of a certain color, such as brindle pied, or fawn pied.

Brindle dogs are said to be the healthiest, while pure white more likely to have problems (sensitive skin and deafness).

Fawn is probably the most common.

Black is usually not accepted if you’d like to show, there should be a little brindle in there (the coat is streaked instead of a solid color). I

If you’d like a French Bulldog in an unusual/rare color such as blue or chocolate, keep in mind that you may not be able to get one immediately and will be more expensive. In addition these are not recognized colors by FCI or AKC.

These are growing in popularity! They can be hard to find, but do appear on Euro Puppy. And are considered very prestigious!

There are 3 types that occur in the blue hue: Blue, or Blue Brindle markings on a dog have a "grey" hue, and the base coat color is a solid blue-grey. It has been debated whether or not this color is also what the standards refer to as 'mouse'.

A Blue Pied French Bulldog is a result of the ‘d’ or dilute gene. In this form, the dilute factor has caused the black hairs to become blue. Pigment on the nose and the pads of the feet are also a grayish blue in color, and eyes are often blue or yellowish gold. Again, this color has also been referred to as mouse.

Last but not least, Blue-Fawn is a variation of blue, that is seen most clearly in the masking points on the face. Typically they have green/gray eyes. It is said that they are usually produced by a fawn or red fawn parent. The blue color is nevertheless rare, and very few breeds possess this gene.

Lastly, I’d like to touch on a few important conformation qualities to look out for when buying this breed.

Firstly always make sure you are choosing from a good breeder! A proper breeder will do everything to ensure their Frenchie puppies will be as healthy as possible and meet the breed conformation.

Look for compactness! What I mean by this is that the back should be short and not like a locomotive train. The legs should not be like a fashion models, but rather stocky instead. A useful tip is that the back line and the legs should be about the same length forming a square box as the below picture illustrates. Note also that this pup has a very nice deep chest.

Back line and the legs are forming a square box.

Look for a large square head in comparison to the body even in a pup. A flat and wrinkly muzzle is also a must. Although changing fast while a puppy, these are early traits to notice as likely to be carried through. Being lean yet muscular is also an important factor but this will be seen more so on a quality adult male more of obvious reasons.

Frenchies are known for their distinct “bat ears”. People usually like them as large as possible and standing to attention as on this 12 week old pup. Sometimes the ears will take a little time to be strong enough stay up on some puppies (late developers).