Why Do Dogs Have Wet Noses?

July 12, 2010 by Sandor Fagyal
Any discussion of dogs' sense of smell ultimately leads to the greatest, most imponderable question about dogs ....this question has nagged kids and adults of many ages and one may even ask this question while sleepily stirring coffee in the morning and looking at Fido eat his crunchies...why do they have wet noses? Scientists have many answers for this. One is that evaporation or moisture from the nose helps cool the dog. It is thus understandable, that dogs that have shorter muzzles, like the Pug or Pekingese may find it harder to breathe, and thus get hotter far quicker in summer. Another theory states that added moisture in the nose makes the dog more sensitive to odors.The most boring answer is that many dogs simply lick their noses with their tongues, thus wetting them. Ruling the last one out...how about going back to Biblical times and using a folk "tail" to explain it? When God flooded the world- the story goes- all life on the planet was inside of Noah’s ark. The two dogs Noah had chosen constantly patrolled the ark, checking on the other animals, and generally just poking around as dogs do. One day, the dogs were taking their daily stroll when they noticed a coin-sized leak, through which water was rushing in at a rapid rate. One dog quickly ran for help, while the other dog gallantly stuck his nose in the hole to plug it. By the time Noah and his sons arrives to repair the hole, the poor dog was in great pain and gasping for breath, but a major disaster had been averted. According to this tale, dogs’ cold, wet noses are simply a badge of honor, conferred upon them by God in memory of that heroic act. Say what you will, but I like this theory the best! *grin* 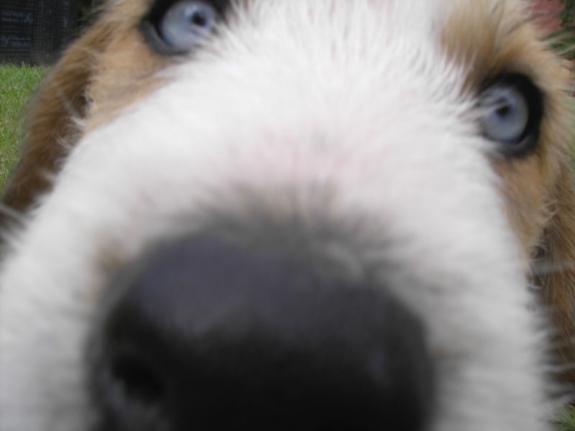