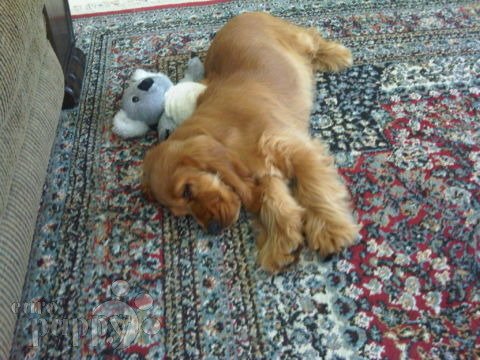 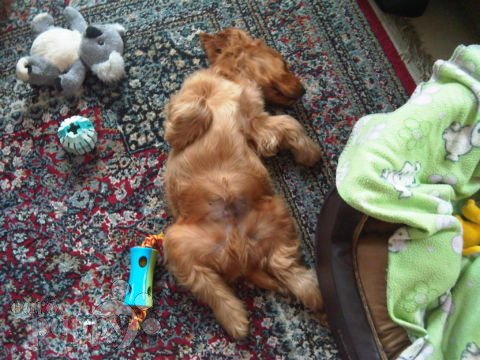 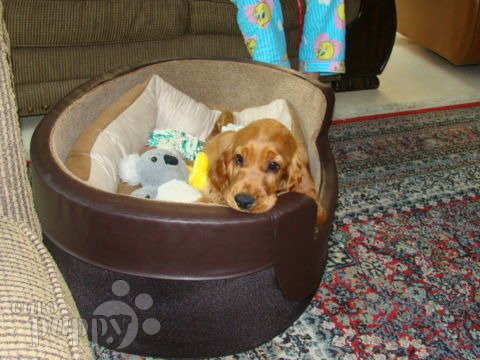 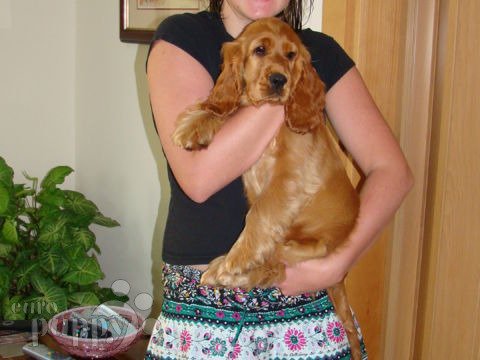 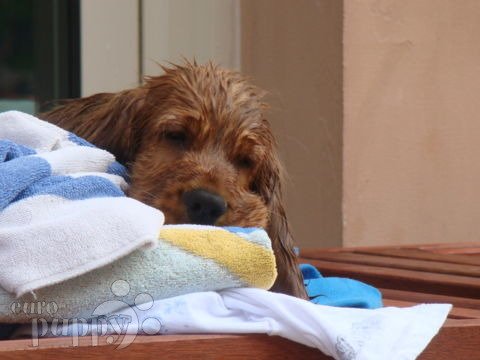 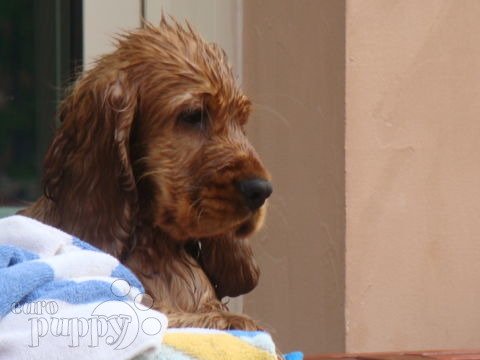 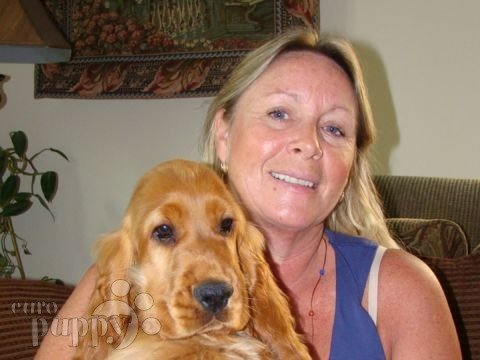 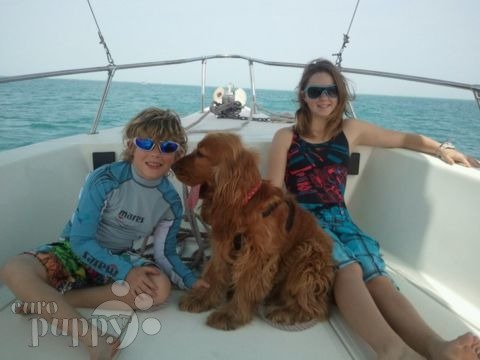 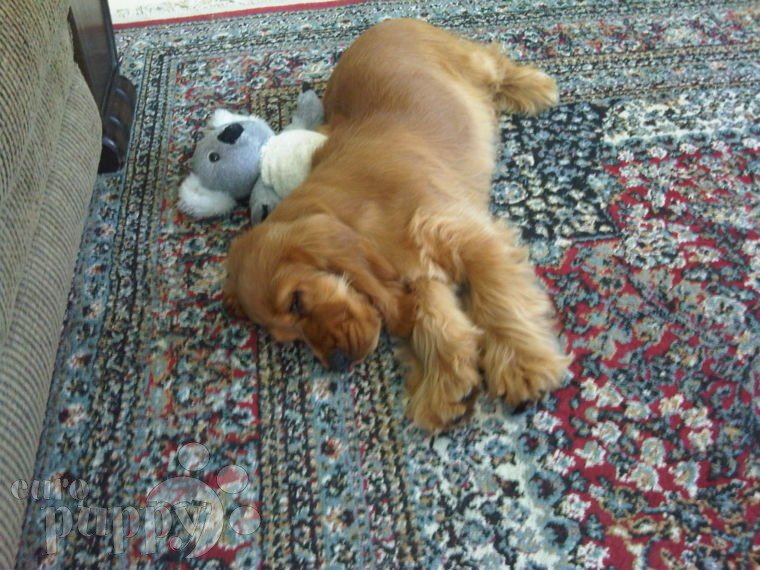 Checkers arrived last night he was fine except for a cut across the
bridge of his nose with some fur missing otherwise he was full of beans and
kept us up until 2am and woke again at 4. I feel like a new mum again!! He
is beautiful though!! A big thanks to all the team and I will send some pics
tomorrow when I have caught up on my sleep!

Please read below Carol’s email to an online newsletter:

In light of the articles in your newsletter on puppies, I would like to share my recent experience on how I went about finding the right puppy for our family.

We lost our Border Collie, Beaufort, about 18 months ago and after a year had passed we were missing having a dog around the house. Our dilemma was ‘where do we get a good puppy here in the UAE’ After we had taken some time to decide on what breed of puppy we wanted that would suit our lifestyle and the conditions here in Abu Dhabi, we decided on an English Cocker Spaniel. The world wide web is a wonderful thing and the next step was to research on the web to find a breeder. I found it was going to be difficult to get a pup from a traditional private breeder as I would have to travel to collect the puppy, this was only one of several other obstacles. During my research I came across a company called Europuppy who are based in Hungary. I read a glowing review (with pictures!) from some people in Dubai who had obtained an English Cocker from Europuppy a year ago and had just imported a second puppy recently. I browsed through the Europuppy website and found that they had several English Cocker Spaniel puppies who would be ready to go to a new home in September. Europuppy also had just about every breed imaginable and they ship all over the world. A long established organization, I decided to contact them.

Eddie from Europuppy responded to my enquiry straight away and the process was started. I can only say the Europuppy made the process very simple. Once the deposit was paid we just had to wait until ‘Checkers’ was old enough to travel to Abu Dhabi. During that time, Eddie sent photos of the pup as he was growing which was fantastic as we could see Checkers as he grew and felt like we were part of it and not missing out on any of the ely puppy stage. Puppies have to be a bit older to come to the UAE due to ministry regulations and normally you would get a pup earlier back home. These updates led to great excitement among the children and they could hardly wait for him to arrive!

As the time drew nearer we then had to arrange for the import permit. Here was where Europuppy really came into their own. They sent me step by step detailed instructions on exactly what to do to obtain entry for the pup to the UAE. They provided all the vaccination details along with the booking reference for the carriers airway bill and the phone numbers to contact at Abu Dhabi airport. They provided the link to the UAE Ministry of Environment website where I had to register and apply online for an import permit. The application procedure was very straightforward. I applied and received my Import Permit electronically within 24 hours. Once this was done all I had to do was ring the airline carrier at Abu Dhabi airport with the import permit information and confirm the flight with them and let Europuppy know – simple. At any time if I had a query Eddie was right there to help, along with the other staff who arranged the flights.

I was concerned about the pup traveling from Hungary to UAE especially since the flight was not direct and ‘Checkers’ had to spend 24 hours at Frankfurt airport. Who would look after our new family member during all that time? Eddie responded with assurances that the pup is well cared for in a special overnight facility at Frankfurt airport and not to worry. Always being the skeptic, I decided to look into the ‘animal facilities’ at Frankfurt airport myself and when I Googled it I was pleasantly surprised. Frankfurt airport is known to have the best import/export and in-transit facilities for animals in the world! The facility takes up the size of a football field and is staffed by 25 vets and 60 staff. All the world zoo animals, race horses etc all pass through this airport facility so I decided I need not worry any more!

As the date drew near for Checkers arrival it felt like Christmas was coming here at home. Checkers was due to arrive on a Thursday night so off we all went to the airport. The puppy arrived around 8.45p.m. (they always ship animals early morning or late evening in the summer months here) The cargo staff and customs staff at the airport were all very helpful and kept ringing the airlines arrivals team to hurry up the paperwork so we could get our puppy as soon as possible. We were taken to meet the vet, who stamped our paperwork and then straight to the cargo area to meet our puppy. The cargo area is not airconditioned but has a very high roof, open sides and lots of fans so was not too uncomfortable for September. Checkers arrived in a proper pet crate, not a wooden box and he was so excited to see us – tail wagging plus! While my husband completed the paperwork at Customs, the children and I entertained Checkers in his crate. The cargo staff provided fresh water for us (though Europuppy had advised us to take some with us) Once this was done, we were free to take Checkers home. All in all, the whole pickup procedure took about an hour and a half but would have been even shorter had there not been a change of shift at the cargo terminal during that time.

I know I have been quite detailed with our experiences but I wanted to show your readers how simple it is to import a good healthy puppy here from a reputable company like Europuppy. I cannot recommend Eddie and the team more highly and would be happy to share the information personally with anyone who is considering buying a new puppy. Europuppy are fantastic and the whole procedure could not be easier! Eddie can be contacted as well at eddie[@]europuppy.com if any of your readers would like more information.

I hope this information is helpful to prospective puppy owners. I have included a few happy snaps of our new addition as well!

Thought you might like to see how Checkers is doing! He is now fully
grown
and settled into the boating lifestyle here in Abu Dhabi

Very easy to train him, he is the perfect puppy and we all love him!!!
(Well he will be prefect once he stops chewing stuff while he is in puppy
mode!)

We may need a companion for him :) 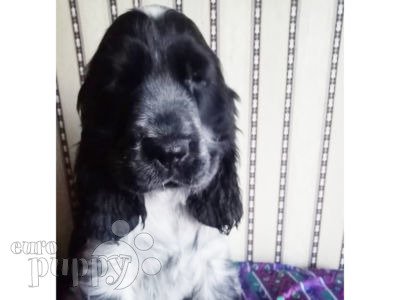 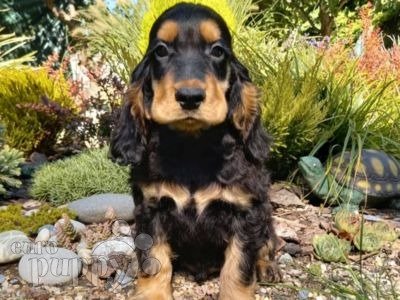 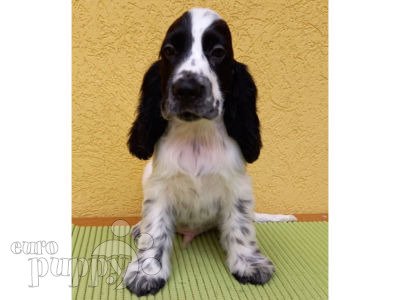